It’s been one of the longest gaps between posts that I’ve ever had on this blog.
I’m still here, I promise. I’ve just been in a transition period in my life.

About five weeks ago, I left South Dakota with everything I owned there packed into my sedan. From there, I drove to Denver, where I visited with Amoni and shot some absolutely amazing scenes (including two outdoor scenes) for Real Spankings.  From Denver, I drove straight through to Dallas, which is the longest stretch of driving I’ve ever done alone and in one go. After a few days of recovery from that, I spent some time visiting with a variety of awesome friends, doing some shopping and eating the greatest BBQ in all the land. I love the time that I spend in Texas. I got to do some filming, too, including stuff for Firm Discipline (still awaiting it’s return to the internet), Amateur Spankings and a few others! Mila and I hung out a bit, too, then I picked her up and we drove to Vegas for Shadowlane. Driving to Vegas was a long and kind of ridiculous process, but it was amazingly fun, too. The whole backseat of my car was packed solid: 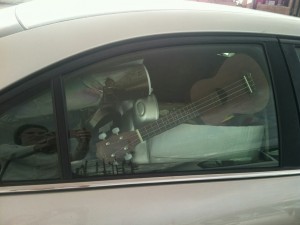 We had misadventures, sisterly arguments, played car games, sang along to a lot of music, ate snacks and did other roadtriply things. We also spent a night with Heather Green and her fiance, who happened to be in the area, which was lovely! Of course, I had to get naked in nature at some point during the trip: 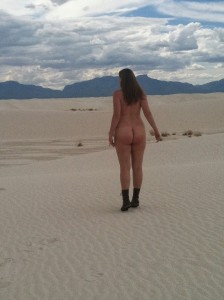 After that, we did eventually arrive in Vegas, where good times were had by all. I’m horrible at writing about parties, and I feel like everyone already has a good idea what Shadowlane was like from all the awesome reports that have been posted, so I’m not going to try to add to it. I will point out that I had a wonderfully fun shoot for Triple A while I was there! It had been a long time since I saw John (“The Chief”) and I was very pleased to get to spend time with him again. I really enjoy filming with him for his site because he has a high tolerance for my ridiculous ideas and we often end up making things that are a bit wacky, but very hot as well. To add to the awesomeness, we filmed with Maddy Marks and Christy Cutie as well. These girls are two of my best friends, and it’s very exciting that now we’re all living in the same city. There will certainly be NO TROUBLE coming from that whatsoever! Anyway, during filming we were all in high spirits and I got into one of my brattiest moods ever captured on film, answering back to everything and showing minimal contrition. I shamelessly stole these photos from John’s blog. Thanks, Mr. Osborne!

The shoot was crazy fun, and we got really lovely content. I’m quite excited to see it released!

After the party was over, we took one extra day in Vegas to walk around on the strip. Mila, Maddy, Christy and I were chaperoned around by Maddy’s boyfriend, Siq. There’s a lot of alcohol available in Vegas, it turns out, and I got..errr…day drunk. Kind of immediately. Before lunch. I’m SUCH A WINNER. Lunch did me a lot of good, though, and we had fun exploring for the rest of the day. The four of us girls were impeccably behaved, of course, and there was no whining, fighting, biting or public spanking of one and other, and I CERTAINLY didn’t make us walk approximately two miles in search of lions that no longer exist. Honestly. I promise.

The next day, Mila and I drove on to Los Angeles, where Mila visited with Raffos and Zeki for a couple of days, including an adventure to Little Tokyo in Lolita attire: 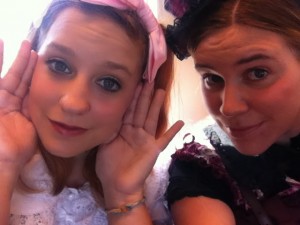 After I said goodbye to my dear and beloved sister and she was returned to Texas, I slowly but surely began the process of getting settled and creating stability. Paul arrived a couple days after Mila left, as we’ve moved in together. I know this is kind of a big thing for me to throw in as a side note, but we’ve both had a lot of changes in our lives recently, and we’ve been building a wonderful life together. Originally, we intended to live Downtown, in the same building as Raffos and Zeki, but we ultimately decided that it was not quite enough space, and a bit too urban for what we wanted and we found an adorable house in the valley. It’s been quite a process getting set up: moving everything from storage lockers, figuring out what we needed to buy and doing so, getting back my dear and beloved cats and getting them settled, cleaning, unboxing, organizing, tracking down and buying new appliances and, perhaps the most daunting task: learning to drive in Los Angeles. So far, we’re both doing quite well with it! There’s been plenty of spanking happening, too, and I’ll tell some more stories about that soon, but I can’t rightfully make a post here without including at least one picture of my reddened bottom, so here’s a teaser for the next post:

Speaking of the next post, I’m not positive when I’ll be able to return to my usual schedule: I don’t have internet at my new house yet. The ISP can’t set it up until October 2nd 0_0. Awful! How will I live?! I’ve written this post while visiting over at R and Z’s place. So, I’ll do my best, but I’m not making any promises!
♥