The day after Paul arrived back home happened to be Valentine’s Day. It was positively joyful to wake up in the morning next to him, knowing that he was really here and that we’d be spending the whole day together. The day was beautiful out: sunny and warm. I made breakfast and we spent the morning and early afternoon relaxing and cuddling. At dinner time, we headed downtown to go to a favorite restaurant.
Now, I hadn’t been spanked for non-professional reasons the entire time that Paul had been gone: about three months. I was antsy for as much attention as possible, and I couldn’t help but let this show in acts of naughtiness while we were out. I didn’t do anything serious, but I was obviously a bit hyperactive, and I pushed tiny boundaries: I ran from the car to the elevator in the parking lot. I pushed all the buttons in said elevator. I was impatient to get inside and get to dinner (all due to excitement, of course!) and I may have whined a bit. While I didn’t act out much in the restaurant itself, about halfway through our meal, I discovered that the table wasn’t exactly even, and by leaning on it, I could make it shift. It wasn’t enough to spill anything or disturb anything, but Paul told me to stop it. So I did. But then I did it again– entirely by accident, of course! And the third and fourth and fifth time were by accident, too. I was very accident prone, until he leaned over and whispered in my ear:

I doubted that he would actually spank me in a restaurant, but since it was my favorite place, I didn’t want to risk it. Despite feeling a bit squirmy after this scolding, I sat quietly through the rest of the meal and pushed only one button in the elevator on the way back down.

Once we got home, we snuggled up on the sofa for a while. I continued to talk a mile a minute to catch up on all the things that he had missed while gone. Eventually, the subject changed to my earlier naughtiness.

“I think you need to be spanked for making such mischief, and for disobeying me,” he told me, pulling me over his lap as he sat on the sofa and lifting my short, heart-printed dress. I was wearing white cotton panties with pink hearts on them, and he rubbed my bottom gently for a while: it was still slightly tender from having been spanked so thoroughly the night before. Then, he started to spank me. The sound rang through the room, sounding incredibly loud, and I let out a sound which was not just caused by the sharp sting. He continued, slowly and firmly, and I cooed, purred, whimpered and wriggled. I wanted more. I wanted to be spanked even harder, and I wanted it to be faster. He teased me for a few moments, but the spanking grew, and it got exactly that: hard and fast. Soon I was gasping, overwhelmed, unable to process each individual sensation until it grew into one big, all encompassing feeling and I slipped, as if underwater, into a delicate, passive place. I was flushed with arousal and entirely content. After a few minutes, he stopped and leaned in to whisper to me again: “I don’t think that spanking you is enough. I’m going to beat you.” He stood me up and pulled my dress all the way off, enjoying the site of me standing in my panties for a moment before giving me an instruction: “Go get my cane.”

I padded off to the kitchen, blushing in the way that being sent for an implement tends to make me blush. My heart was dancing in my chest: I hadn’t been caned in a long time. Besides, I hadn’t been caned by him in months, and that experience is a different thing than playing that way with anyone else. It’s not just the fact that we tend to play harder together. It’s an emotional thing: I’m far more vulnerable with him, and I was in a state of particularly high vulnerability. I was apprehensive, but in a positive way.

In the white cabinet in the kitchen where the implements are kept (AKA the “Cupboard of Awful”) there are four canes. These can be divided into two categories: “every day” canes and “special” canes. There are two lightweight rattan canes of different lengths which are the “every day” canes. These are used when filming, during sessions, when playing with other people, when traveling and, very rarely, during our personal play. The two “special” canes are fancier, denser, scarier vintage canes. The smaller one is the cane that we use nearly all the time in our personal play. The larger one has never been used: it’s reserved for very serious infractions and I’m somewhat terrified of it. It’s thicker and denser than the cane that Paul usually uses during our personal scenes (both playful and disciplinary) and that cane is incredibly heavy, dense and thick. It also has a lot of emotional attachment, and this mental side of things has a strong effect on me. Without being told, I knew to select this cane, and I brought it back rather awkwardly, thinking about how much it was going to hurt.

Paul took the cane from me and bent me over with my hands on the seat of the sofa. Bent over positions feel more formal to me (as opposed to prone positions, which feel more intimate) and the mix of the formal positioning with my vulnerability and arousal, as well as our seriously intimate emotional connection worked for me. It brought me back to very old fantasies, and I quivered with anticipation. “Open your legs,” he instructed, and I did so, rather sheepishly.

“Yes, Paul,” I affirmed, floating off into a place where I was focused on belonging and couldn’t feel safer.

Then, he began to cane me. The first stroke made me cry out: a mix between a wail and a sharp exhale. It bit and stung, and the pain was growing rapidly. I expected a long pause, during which I would squirm and whimper and then finally calm myself and wait for the next stroke, which would follow. I was taken by surprise when the next stroke followed rather immediately after the first. The parallel pains blossomed, and Paul gave me a short break to catch my breath before landing another pair of strokes. I tried to adapt to this new pacing, but it left me trembling. At one point, after about six or seven strokes, I whimpered out “How many?” In the past year or so, I had become very attached the idea of knowing exactly what was going to happen before it started. Paul didn’t hear my question, I don’t think, and I realized I didn’t actually want to repeat it. I didn’t need to know. I could let things be entirely out of my hands, and just trust him to give me the right amount for what I needed. I found doing this very freeing. Paul and I developed our relationship in the wake of me getting out of something which had stopped being emotionally healthy for me, and I’ve struggled with fears, insecurities and anxieties about things which used to seem simple to me. Paul has been incredibly patient: never pushing me too hard and always making me feel safe. It was rewarding to be able to bask in this safety without some of the nervousness that had been gnawing at me. As such, neither of us know how many strokes I actually took, but I know it was a lot. He continued in this paired fashion, and I cried out and wailed, but didn’t actually break into tears. I was too happy to be in that moment, too filled with adrenaline, and too aroused to go to that place.

Finally, after what seemed like a very, very long time, Paul said “I’m going to give you six more strokes.”

“Six?!” I gasped. I was expecting that he would say one or two, maybe. For a second, this many more strokes seemed impossible, but I quickly accepted it, and I took pleasure in the thought that I would take them as well as I could. Paul instructed me to shut my legs, and I knew that this meant that at least some of these strokes would be on my thighs. I braced myself for this, focusing on the feeling of belonging, of this being something decided by him for me, and of being out of control. I felt another sharp shiver of excitement course through my body. It was followed quite quickly by the first of the six final cane strokes, which landed across my thighs. I shouted: it was shockingly painful. All six of these strokes happened with fairly quick pacing, and I found myself wiggling, squirming, wailing, jumping up and down in a way which was probably rather ridiculous to look at and, all in all, struggling. They were very hard, and I could feel how swollen my thighs were already. I felt each welt rise as I gritted my teeth together, trying to bear the red hot agony that they brought. Then, it was over.

Pretty immediately, I collapsed into his arms on the sofa. Paul held me close, and I felt wrapped up, tiny and very, very loved. I thanked him for beating me, and he stroked my hair and cuddled me as I came down from my endorphin high. Finally, I stood up and gently felt the welts. They felt pretty obvious to the touch, and I wondered how it looked. I suffer from an inability to show just how severely I have been spanked sometimes, and I was afraid that this would look less spectacular than it felt.
“Do I have lines?” I asked Paul. He looked carefully.
“You have a few,” he told me. “If you go look quickly you might be able to see them.” I was disappointed. This was ALWAYS the way it turned out. My stupid bottom not marking up the way it should! I grumbled as I walked to the mirror, where I turned around and saw this: 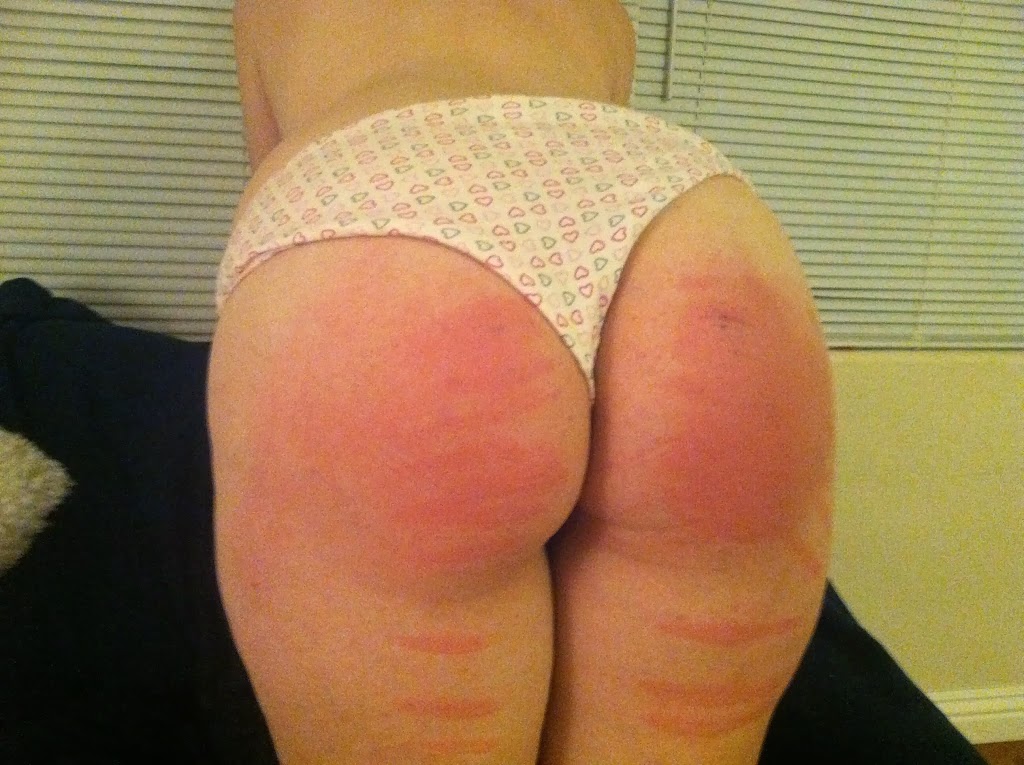 There was a purple patch where two lines had crossed and the lines on my thighs were very distinctive.
“HEY!” I yelled. “You tricked me!” Paul laughed from the other room.

He then helped me document them in a couple of different lighting situations: 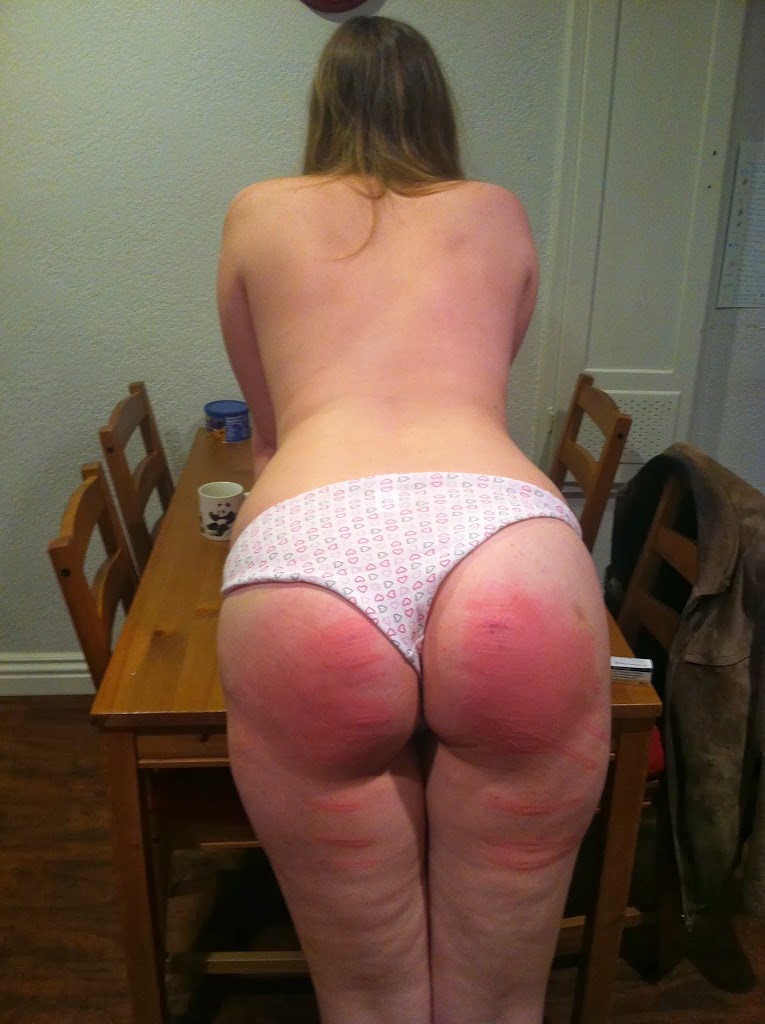 After taking photos, we retired to the bedroom for some time together before going to sleep.
It was the best Valentine’s Day ever. ♥