I’m back! For real this time!
I’m all settled in at my new home with Malignus in South Dakota. I finished the majority of my unpacking today. It looks a little odd to see my smiley, cute stuff in a place that I previously thought of as “his”, but I’m getting used to the idea of it as “ours.” HeatherFeather is still visiting with us: she traveled with us and has been helping me get settled in. She’s an amazing scene-sister: she supports me in ways that help me to grow and defeat problems, and she never fails to make me laugh hysterically. I’m going to miss her when she leaves on Monday >_<.

Because I’ve been away from the internet for a while, I have quite a few stories to share from my adventures. I’ll be taking a few days to get caught up with them, and then I’ll be back to posting things as they actually happen ;).

Things started in Los Angeles- HeatherFeather and Malignus arrived, and we spent the next two nights in a hotel. We had a few of the people I’ve become close to over for a play-party the first night. It was a ton of fun. I got spanked by one of my friends while he was wearing a panda suit, we ordered room service, Porcelain Ass abused everyone in sight with a sadistick (pure evil! I’m very glad we don’t own one!), and MaskofNormality presented me with a gift that he made me: 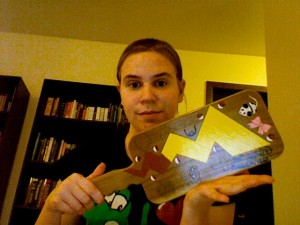 It’s got Pikachu’s tail and drawings that represent some of my best friends on one side. 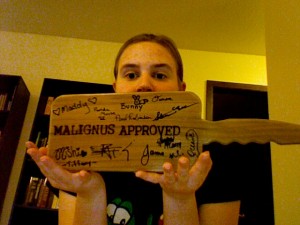 And the Malignus Seal of Approval and my friends’ signatures on the other!

It’s ridiculously solid and really, really hurts on impact. It has beautiful craftsmanship, and I get kind of emotional over all the love and effort that went into its creation whenever I see it.

It’s okay for you all to say “AWWWW!”

I also got this great gift at the hotel party:

Because nothing says “I love you” like hand-shaped welts on the inside of your thighs. These were hard: the individual finger marks swelled up like cane-welts and the bruises were still hand-shaped four days later.

The next day was a little rough: I had a hard time saying “goodbye” to everyone at the final PTNG social, and packing the car was stressful. Princesstoy came over to the hotel room, because she didn’t make it to the party, and brought me an adorable bow that she hand made me. Malignus gave her a beating while I bantered with them, and then she got a course in advanced spanking technique using me as the learning dummy. Near the end of the evening, Malignus hit me with Princesstoy’s Evil Stick from Hell©, which, as expected, hurt a lot. I still maintain that it was not as bad as our stupid, extra thick lexan paddle, though.

On Sunday, we headed to Bizzarre Bazaar at Threshold after packing all my stuff up. It was the best way to end my time in LA: nearly all my friends from the scene came out, and I got smothered in hugs and affection. Bizzarre Bazaar is an anual event in which Threshold has vendors and “tasting booths” set up. The tasting booths allow you to learn more about or participate in a particular kink activity. In an indeed bizarre turn of events, I participated in three of these booths which had NOTHING TO DO WITH SPANKING! 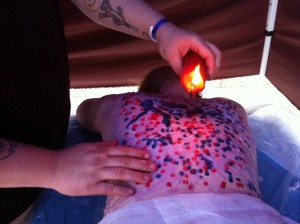 That’s me! Alex Reynolds! Covered in wax! Unprecedented!
The wax play was extremely relaxing: it wasn’t painful at all and it just felt warm and snuggly on my back. It didn’t do anything for me (or even really feel kinky) but it was super nice, and I’d do it again for the “feeling good” factor. 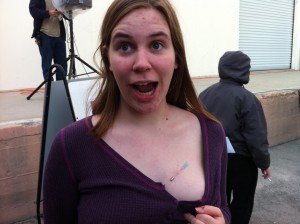 That’s a needle. In my body.
The play-piercing experience was less relaxing than the wax play, by quite a bit. I’ve had my fair share of experience with needles in the past, but in every case they’ve either gone straight in and then straight out again, or they’ve gone through something and out the other side (when I got my ears and septum pierced back in the day). The whole “going into the skin” part wasn’t scary at all, and it didn’t hurt that much, but when it started to come out the other side, and I was aware that it was under my top few skin layers, I started to panic a bit. I hyperventalated a little, but the piercer was calming and Malignus was there with me (I would not have done it otherwise, I don’t think) and he was gently rubbing the back of my neck and playing with my hair and I quickly regained composure.

There were two booths set up which scared me a bit: the Violet Wand booth and the Fire Cupping booth. Violet Wand bothers me because of the noise: it reminds me of something of a non-consensual nature from my early life and I find it deeply unsettling. Malignus encouraged me to choose to associate it more with the sound of a tattoo gun, with which I have pleasant memories associated, and that did help quite a bit. Fire Cupping freaked me out because I have a fear of having my blood suctioned out of my body through my skin. I got this from some movie when I was a kid, I think, and it’s never left me. At first, I didn’t even want to look at the cupping while it was happening to other people. Malignus explained how it worked to me and reassured me that it wasn’t going to be horrible, and near the end of the day, I was willing to try it. 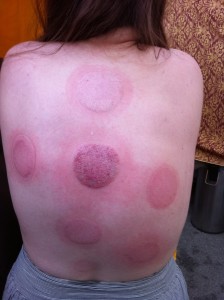 I’m not going to lie: I didn’t like it. It hurt in a weird way: especially the big one in the center. The one stayed on my back and kept hurting for a couple of days, too. I didn’t panic or freak out, though, but I think there was some whimpering happening. I was pleased with myself for doing it, though.

After the event was over, we said our final (nearly tearful) goodbyes and hit the road to Vegas.
To be continued tomorrow 😀

Is it LOL Day?

I’ve been on the road and off the internet for about a little over a week now. I came back to discover that today is Love Our Lurkers Day. If you’ve been lurking and reading this fabulous blog and feeling uncomfortable commenting, now is your chance! A very low percentage of people who view the page leave comments, so those who haven’t or don’t regularly are invited to today. I love you!

The time that has passed since my last update has been strange indeed. I spent a few nights finishing all the things that needed doing for my move (with amazing help from Mask of Normality) and on last Friday, I picked up HF and Malignus from the airport. We spent Friday and Saturday nights in a hotel in LA and enjoyed an awesome goodbye party on Friday night. On Sunday, we went to Threshold’s Bizzarre Bazar on our way out of the city. It was chock full of people I’ve really enjoyed in the LA community and I was more than pleased to introduce them to HF and Malignus. From there, we went on to Vegas, where we spent the night and then a very fun-filled 24 hours. On Tuesday, we drove to Salt Lake City, which is where we’ve been since. We’re staying with a friend who has several young children, so there have been few opportunities to steal away long enough to blog: the past three times I’ve tried to make this post,  I’ve had to shut my computer because a small face appeared on the other side asking “What are you doing?!”

I don’t know how the parents out there make it work. I suppose when you’re the parent, the kids are less interested in following you around all the time. Maybe.

There will be longer posts coming up with more stories and some photos from the adventures we’ve been having (although don’t get your hopes up for spanking photos: there aren’t any of those yet.) For now, I wanted to make sure that you didn’t think I’d forgotten you. There are just lots of distractions, things preventing me from getting online, things to do and feelings to deal with. I’m getting there, though. I’ll be in my new home on Sunday and I’ll get to work creating a new “normal” for things to get back to. 🙂