Awards and Unveiling a Secret Project

Hi guys!
I’ve just had way too much stuff going on recently, and I have about six blog posts in progress, but I wanted to take a second to point out a couple of things.

First of all, I want to remind you guys that the voting for the 2014 Spanking Awards has officially started. This year, the Awards are being hosted on Spanking Blogg instead of on the now pretty much defunct Spanking Spot. 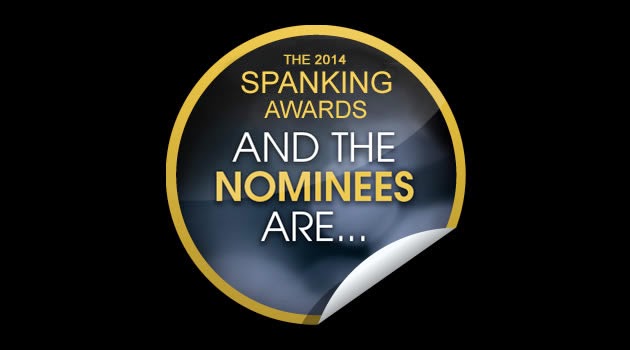 This year, Alex in Spankingland was once again nominated for Creative Spanking Blog of the Year. During the last awards (in 2012, as no prizes were given in 2013) I was proud to have received this award.

I absolutely LOVE a lot of the other blogs who were nominated this time, though. Included among them is the blog that encouraged me to start blogging in the first place: Erica Scott’s Life, Love and Spanking. Erica is one of my best friends, and if a week goes by where I don’t get to see her, it seems like it’s been too long. Her blog is heartfelt, honest and hilarious, and she’s been a role model for me in my process of opening up and talking about my real life on my blog more and more.

Another one of my favorite blogs was nominated: Pandora Blake’s Spanked Not Silenced. Pandora’s blog is an amazing mix of important intellectual discussion of spanking, D/s and pornography topics as well as very personal, introspective writing. She’s also been a big influence on me as a blogger, and I followed her writing closely back before it ever occurred to me that I would meet her!

A third blog that I really enjoy which has been nominated is Snowflake Roasting Service. I don’t actually *know* S and Snow, the couple who runs what is probably the best original content tumblr spanking blog of all time. It feels like I do, though, because their exhibition isn’t just for spanking and sexual play: they share a lot of their lives with the internet. I’ve talked to S a few times over the past couple of years, too, and he’s always been super friendly and nice. Definitely A+ people doing top quality amateur content.

I don’t really know Hermione, who writes Hermione’s Heart, either, but she’s very dedicated to keeping the conversations in the spanking blogs world going, and she blogs with consistency that makes me jealous. She writes in a way that makes her feel like an old friend, and I really enjoy following her.

I had never visited the other nominated blogs, but I’m definitely going to check them out now!

There are several other categories up for voting now, which I will certainly talk about in the next couple of days. Getting writing done has been hard recently because there are a lot of distractions when I’m away from home.

Speaking of writing: over the past several months, I’ve mentioned that I’ve been working on two big projects. One of them is ready to reveal: I’ve just finished writing my first ever spanking romance novel, which will be released by Stormy Night Publications in the next couple of days. I’ll be posting more information about it soon, but it’s been a big undertaking for me. I’ve never written anything longer than a 30 page academic paper before, so writing an entire book was a challenging and exciting process for me. I loved writing it, though. It was an interesting experience, too, because as much as I write about my personal life and as many spanking stories as I’ve shared, I almost never write about sex. I had a ton of fun creating all the sex scenes in my book, borrowing bits and pieces from long term fantasies of mine and from actual experiences (but you’ll have to read it and try to guess which ones are which). The book explores a lot of themes that I find super hot, although not necessarily the ones I do on film: specifically, it’s chock full of medical play and age play scenes, but of course there’s a very high dose of spanking, too. I personally think it’s super hot, and I hope that you’ll give it a read when it comes out. So, stayed tuned for more information on The Doctor’s Little Girl in the next couple of days.

Anyway, it’s the middle of then night in the timezone where I currently am, so I need to head to bed.
More tomorrow!
❤︎

4 Responses to Awards and Unveiling a Secret Project