When I last left off in the tale of my adventures overseas, I’d just been picked up at the airport upon my return to England from a brief stay in Holland. I’d been greeted by Paul Kennedy (of Northern Spanking) and Zoe Page (who is a different person than “Zoey” who has been mentioned in a few older posts). The three of us were going to go by car up to Derbyshire, where we were going to meet John Osborne and do two days of shooting: one for Northern and one for Triple A. It turns out that Zoe had been feeling sick earlier that day, but had gotten enough rest to feel up to coming along despite that. This was the first time that I’d ever really gotten to ride in a car in England, and I found that kind of excessively exciting. I was very aware of how different certain things were. I was pretty fascinated by this stuff, but I also tried to keep this at least somewhat under wraps: I didn’t want to be “that girl” who comes to a foreign country and marvels at every dumb little thing and annoys everyone around her. Still, I liked riding in the seat where I’m usually driving (they let me sit in the front ^_^) and noticing the different wording on signs and such things. I was particularly amused by a series of signs that listed the cities we were driving towards and included “THE NORTH.” I can’t exactly tell you why this made me giggle a lot, but it did.
We stopped at the first service area that we found to get something to eat, since I was pretty starved. I there encountered a minor problem: I didn’t know what the fuck most of the stuff on the menu was. I was a matter of things having different names combined with not being sure how similar food items would be to what I was used to. This lead to me asking about eighty questions, throughout which Paul and Zoe were surprisingly patient. I had originally been slightly intimidated by Zoe, since I had seen her be pretty terrifying on film before meeting her. I was glad to see that in real life, she was sweet and awesome, and my rival at being a goofball. We related on a few things and giggled quite a bit. Then we got ice cream, which is instant happiness for me. I was pretty happy with my life, and instead of feeling worried like I had upon my first arrival, I felt excited about whatever adventures were in store for me.
After dinner, we got back in the car and drove the rest of the way there. I discovered that I’m not fond of the roundabouts system: it makes me a little bit queasy. The ride didn’t seem too long to me, probably because I was very contented, even though I was much quieter than I usually am because I was still adapting to my surroundings. Eventually we arrived at the hotel where we would be staying for the next two nights: it was a small and quaint bed and breakfast. The caretaker greeted us and showed us to our rooms and then asked us some questions about breakfast. I basically just agreed to everything that she said, because I didn’t actually know what a “full” breakfast entailed and I didn’t want to look ignorant. Then we went up to get settled. Zoe and I were sharing a room, and I thought it was super cute, even though it was a bit cold.

They had left us a tea set which I found excessively adorable:

We then went to meet John and chat in the other room. We talked about the studio where we’d be shooting, looked at some content that John had shot there previously on his computer and just chatted a bit while we had a glass of wine. I was wearing my bunny pajamas, which Paul pretty instantly decided he wanted to use for a film that we’d be doing the next day. This pleased me greatly, because I’m a little obsessed with my bunny pajamas. Eventually I got tired and Zoe and I retired to bed.
The next morning we got up and packed our things for the day, then met the guys downstairs for breakfast. We were a little bit late. That’s what happens with girls (read: Alex) in the mornings sometimes. :/ The woman who ran the B+B (who from this morning on was referred to as “breakfast lady”) brought out our plates. The plate was filled with stuff that I wasn’t really expecting. I ate all my meat and some toast, and then sort of picked at the rest of the stuff. Eating beans at breakfast wasn’t really all that appealing to me. There was a big pile of mushrooms on the plate, and I’m super-deadly-allergic to mushrooms, so I refused to eat anything they had touched out of fear of going into anaphylactic shock, which is generally not how I like to start my day. And since I hadn’t asked for anything otherwise during the conversation with breakfast lady where I agreed a lot, my eggs were served with uncooked yolks. I know that this is simply me being fussy, but I just won’t eat eggs that aren’t totally and entirely cooked. I’m tremendously stubborn, because I think they’re gross. Serious_Face once refused to let me get up from his table until I’d at least tried one, and I sat there petulantly for three hours until he gave up and beat me instead (still better than the eggs). Fortunately, no one at this table wanted to waste the entire morning watching me not eat, so we told breakfast lady that we were finished. She was not pleased with me, and gave me lots of dirty looks for not eating her breakfast. We all found this infinitely entertaining. After a quick visit with the fat, hotel cat named Monty and a brief incident in which John hit a trashcan with his car while trying to backup, we were on our way to the studio.
Once we arrived and unloaded at the studio, I became aware of it’s primary feature: it was cold. I don’t like to be cold. (Question: why do you live in South Dakota, then? Answer: have you seen how many things that I don’t like but do?) Fortunately, Zoe was basically the best ever and made me tea approximately every 20 minutes to keep me warm.
Once set up and makeup were completed, we got to filming the first scene. It was between me and Zoe and filmed on a stable set that included several bales of hay. This hay got everywhere, and it’s actually STILL in my hairbrush, but it looked awesome and was kind of fun to romp around in. 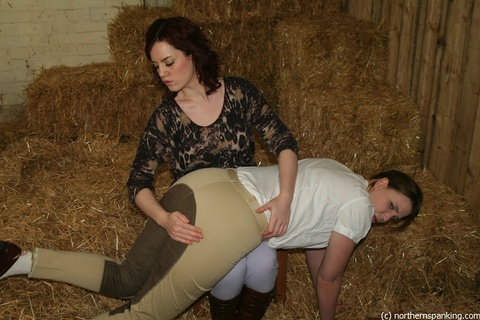 Filming with Zoe was interesting because most of the scenarios we were involved in were written so that we were peers and Zoe’s character wasn’t so much of an authority figure over me as she was just a bully. This was a fun and refreshing change of pace for me. Also, Zoe is really hot. And she’s very creative within a scene: I was immediately taken aback by how quickly she came up with ideas of new directions in which to take her bullying and bossing. Plus, she was great at spanking. This scene was actually my first riding crop scene (I’m pretty sure, anyway, and certainly my first on film) and I liked it quite a bit: stingy and whippy without feeling like any other implement, in particular.
The second scene that we did was similar in terms of character relationships: Zoe’s character was kind of an awful bitch and I was a goody-goody and a bit of a nerd. That obviously worked well for me, because that’s sort of me in real life :P. This was set in a school room, which made me very happy indeed. 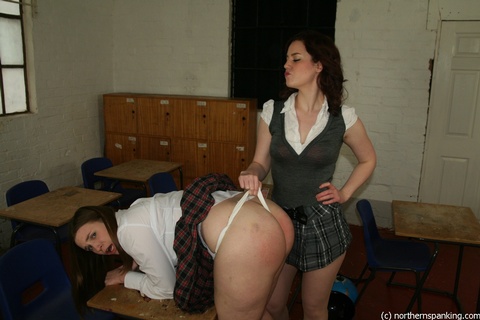 The desks in the school set were covered in graffiti  which kind of fascinated me, especially because a lot of it had slang on it which I didn’t recognize. I then got a vocabulary lesson on various ways to call people a slut in England. I also couldn’t help but add to the vandalism a little bit:

And I added a little love for my bestie: 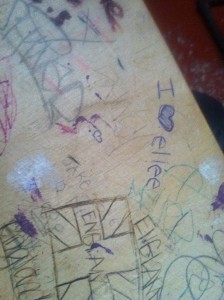 Our third scene was a very traditional and straight forward, bedtime punishment scene that Paul did with me. There isn’t actually anything that unique about it, but it’s probably my favorite scene that we shot that weekend (honestly, it’s probably among my favorite scenes I’ve done on film). This is because it appeals to a lot of things at the center of my kink. My character was genuinely a good girl, but she was clearly quite far out of line this time and had gotten herself into big trouble. There was a domestic setting and the inclusion of my cute pajamas, which are both good things in my book. The spanking was primarily OTK while on a bed, which is my personal favorite spanking position, and the more severe stuff which followed was given with me lying over pillows, which is a very familiar position for me, and one that I find very emotionally comfortable. And I got hit on my thighs.

All of this plus Paul’s attitude in the scene fostered a lot of vulnerability in me, and I just dove into it. I let myself get really worked up and I either cried a little or came very close to it (I don’t remember now). When it was finished, I felt very genuinely cozy.