Oh hi! Happy Halloween! I’ve been out of town for about two weeks and up to my eyeballs in stuff to do once I got back: I’m finishing up a very exciting project and it’s taking a lot of time and writing energy (hint hint)! I meant to get this KOTW post up yesterday, but I ended up having an allergic reaction to something and getting hives and all sorts of problems, so my night didn’t end the way I had planned it. -_- I’m doing better now, but I’m EVEN MORE BEHIND THAN BEFORE. AHHHHH. I’m going to Maddy Mark’s house tonight with Christy Cutie, Paul, Rafa and others to give Halloween a second attempt, so stay tuned for photos from this. Anyway, this post ended up being much more vulnerable than I expected the topic to be, but here you go! Let me know what you think!

KOTW this period focused on Tights and Stockings.

Starting out in my kink life, I never had much opinion on stockings and tights. Living in South Dakota for two years meant that I wore quite a lot of tights, since most of the year, I had to have them on in order to wear skirts. I had stockings, which I usually only wore with lingerie or during shoots, but neither item felt particularly kinky to me. While I’ve always thought that I looked cute in tights under clothes, I don’t like the way that they make my stomach and butt look when I’m only wearing them. Specifically, the seam down the center and they way it leaves a compression mark on my stomach that looks like a scar is seriously unsexy to me, and sometimes, tights make my butt look… squeezed. This is a feeling that I like: although it’s nowhere near my primary kink, I do enjoy the feeling of encasing fabrics, which I think is a lot of the tights fetish for some of my friends who have it. I don’t like the aesthetic of this effect, though.
Another problem that I have with tights is the way that they interact with panties. Panties are my second biggest kink, following spanking, and I want them to be accessible both to the eye and to the touch, especially when I’m wearing a dress or skirt. Tights usually end up covering the panties in a way that makes difficult to touch and view. So, tights weren’t high on my list of things to wear to play, but they were still part of my every day wardrobe. 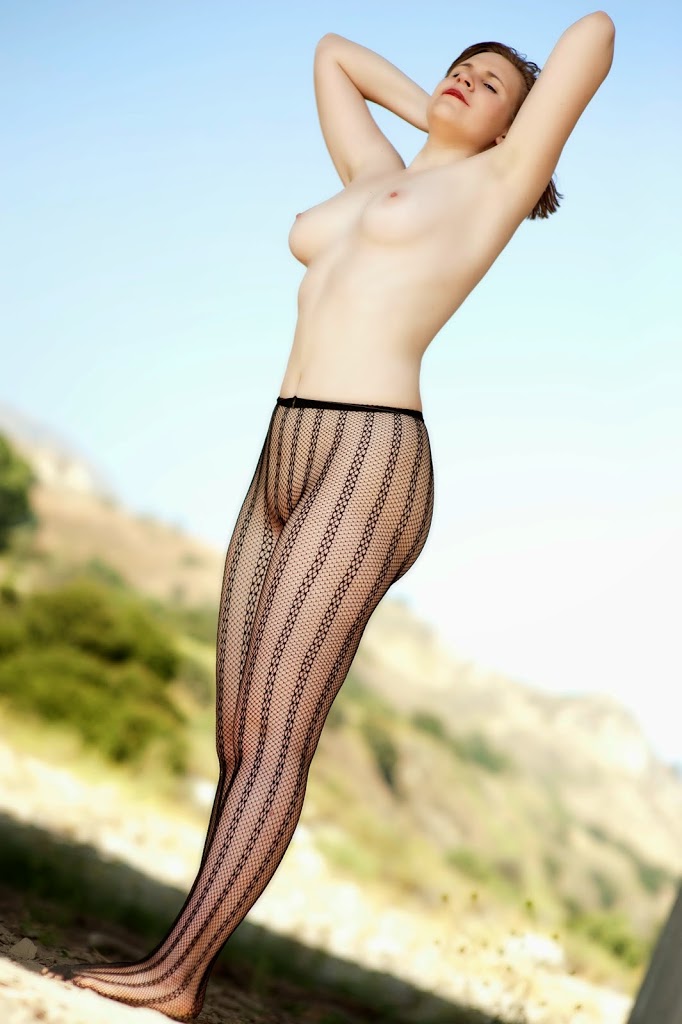 Photo by Erofet Imageworks, in 2009 or something like that. Chilling in mountains in some tights and nothing else!

That said, when they look right, stockings are pretty. I like the way they feel (such silkiness) and I like the vintage air that they lend to an outfit. They’re highly feminine in a way that I can truly get behind. If I don’t have to constantly fuss to keep them straight (and if they’re coming up high enough on my legs to not make me feel self conscious, since my thighs are a big source of self consciousness for me in the first place) they make me feel classy.
But they never were something that I went out of my way to incorporate into spanking play. 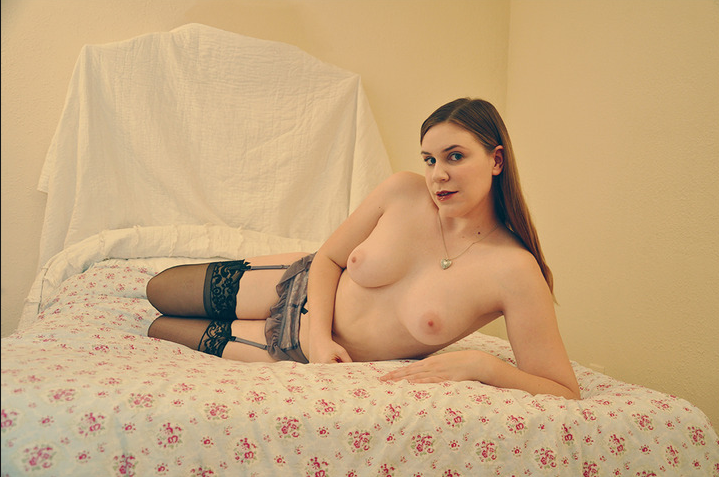 I wish these stockings went up three inches higher or so! Photo by Omar, in January of this year.

Why didn’t stockings “do it” for me for spanking, even if I acknowledged how pretty they are and how nice they feel to touch? Because, in my mind, stockings feel too “grown up” for my head space in most of my spanking scenes. While I like formality, I like “school uniform” formal much more than “stockings and an elegant dress” formal. It’s really only in the past couple of years that I’ve come to enjoy playing more adult characters while getting spanked, a difference which I note in my mind as knee socks vs. stockings. For example, one of my most grown up, powerful bottoming roles on film ever was in Corporate Intimidation for Dreams of Spanking, and what was I wearing at the time? 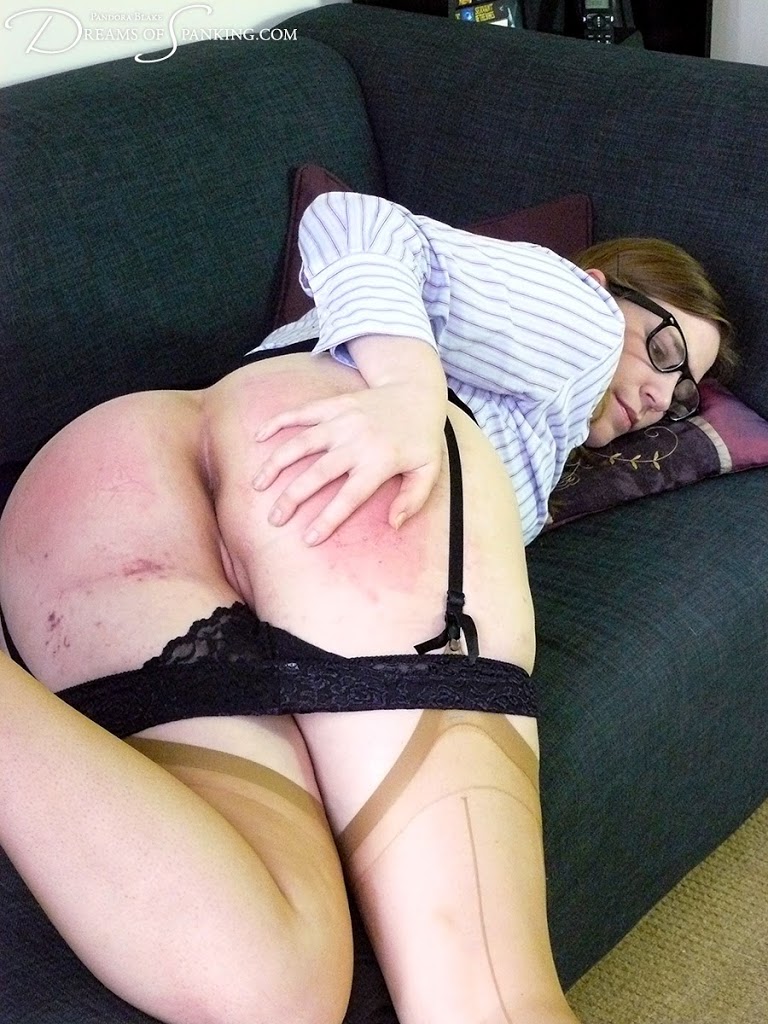 Stockings have become a bigger deal for me in the past year and a half or so, though, because Paul is particularly fond of them. He says that he finds the gap between my bottom and the top of my stockings (which has so long made me feel silly looking) sexy, saying that it invites him to want to smack the backs of my legs. He particularly enjoys me wearing stockings with heels (another thing which has taken some confidence for me to get into wearing) and suspenders (garters). There’s something incredibly erotic for me about wearing something that I know pleases my partner, especially my Dominant partner. When I choose to put in the effort and dress this way, I’m doing something to make him smile, plus I can almost guarantee play time later. It’s a way of being subtly submissive out of my own free will, and it makes me feel like a good girl. This isn’t to say that I’m only doing it for him. Now, I’ve come to feel sexy and empowered when dressing this way. But I don’t think I would have embraced this side of myself as well without the push to do it to please him.

I’m happy to be exploring more “grown up” spanking scenes sometimes now, with stockings on in all of them, although I feel safest and most secure with knee socks on still. It’s a space for me to move into, I suppose. Something that I’ll come to own. As I get older and more confident in general, and as having a loving supportive environment instead of one which emotionally beats me down allows me to blossom and be less self conscious and less anxious, I think I’ll come to identify more with the character of a powerful, sexy woman who gets spanked despite being very in control (like in Corporate Intimidation) at times, although I suspect that my very vulnerable school girl self will never really diminish. I’ve changed so much in my time in the scene that I no longer like to predict what, exactly will happen, but I know that this is an area where I’m hoping to grow.   ❤︎

6 Responses to KOTW- Hosiery: Maturity and Security in Stockings