If you haven’t picked up my first spanking romance novel, The Doctor’s Little Girl, now would be a good chance to do so! It’s on sale for just $2.99 on Amazon right now. 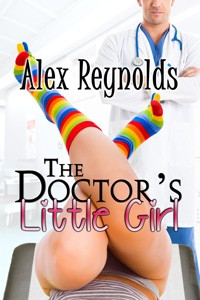 In case you don’t remember from my earlier posts when this was first released, here’s the plot:

What people have had to say about it in the reviews section:

“This was a really great story. It had a great set of characters, the plot was very believable and held my attention, the sex and spanking scenes were smokin’ hot. I actually ended up reading this book in one sitting. I thought I’d just read one chapter before bed, one chapter turned in two, two turned in to three, until it was past midnight and I finished the story. (It was worth the extra yawns the next morning.)”

“This book goes above and beyond the call of duty, with a well-developed cast of characters and a plot that makes the eroticism feel organic and believable. Good stuff.”

“This was such an adorable story! I LOVED Molly. She had such spunk and personality that I could see myself being friends with her! This book took my attention and didn’t let it go. I read this book in a couple hours and I’m sad that it is over. I want to see more of Molly and her daddy… and speaking of daddy. This book has some AP in it, well a lot of AP in it but it isn’t extreme it isn’t dirty its beautiful and caring AP. It is sweet sexy and fun and I highly recommend it!”

And, of course, a quick excerpt:

Also on sale right now is a book from fellow Stormy Night Publications author, Meredith O’Reilly, who I got to know recently at the author’s retreat that we both attended in Dallas. If you like age play stories, you might want to check out Little Samantha’s Choice, also just $2.99 on Amazon. 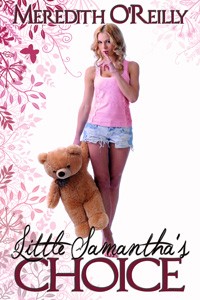 After twenty-five-year-old Samantha Briggs leaves an initially minor sickness untreated, the illness worsens quickly and she ends up feverishly sleeping the weekend away. Her husband, Jackson, stays by her side and sees to all of her needs. But when she wakes up wearing a diaper and footie pajamas, she is furious. Jackson apologizes, but he does admit that he has always yearned to care for Samantha like a loving daddy.

Samantha is shaken by this revelation, but after some reading and some thinking, she agrees to try being Jackson’s little girl. She soon finds herself happily immersed in a land of games, dolls, bedtime stories, and her daddy’s loving care for her every need. She isn’t sure how she feels about wearing a diaper, and she definitely doesn’t like the spankings she gets when she’s naughty, but the peaceful surrender that comes with being her daddy’s little girl makes her feel as though every stressful part of her life has been erased.

Samantha and Jackson fall into a routine: she is an adult on the weekdays, and a little girl—and sometimes a baby—on the weekends. But when she slips up and embarrasses herself by behaving childishly during a stressful morning at work, she reconsiders their new relationship. Will she give up the lifestyle she’s grown to love so much, or can she come to accept that there is nothing wrong with choosing to be her daddy’s little girl?

Hopefully, these two can tide you guys over while I’m putting the finishing touches on my newest book, which will be coming out soon! I can’t wait to share it with you guys!

I’ve had an exhausting past few days, and there’s no rest in sight yet, but hopefully I’ll get some “free” time to catch you up on my summer adventures more soon. You know, hopefully before summer is over!