Spankee of the Year

This post has been delayed because of the insanity that life has been recently, but I’m finally finishing it!

I went to bed the night before New Year’s Eve feeling pretty down. I had no plans for the following evening except sitting at home on the couch with my family, when I would have much rather been having an exciting, partying adventure. I felt glum.

I woke up the next morning early afternoon and opened up my laptop. I knew that the results for Spankee of the Year were going to be announced that day, and I wasn’t sure if they would be up yet or not, but I had been dedicating way more time and attention to this contest than was really necessary.

I discovered that they were, in fact, posted. John’s blog is set up so you can’t see the full post when you visit the homepage and have to click on the image to continue, which made the suspense of opening the page higher than it would have been. Honestly, I was expecting to not even place in the contest, and I was happy to be among only ten girls nominated. All of the girls who were in the running are absolutely gorgeous and talented performers. Some of them are my very good friends of mine. I had a faint “wouldn’t it be awesome if I won?” thought process in the back of my head, but it seemed like a pipe dream to me.

When I clicked though to the page, I saw this: 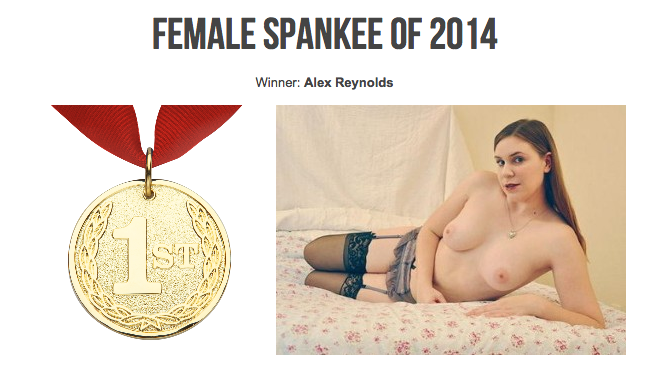 I just kind of sat there with my mouth hanging open staring at it for a long time.

Despite not actually believing that I was likely to win, I really wanted to. I’ll be perfectly honest– I’ve always wanted to win this as long as I’ve been a spanking model. I feel a little bit silly about it, like caring this much about winning an award is somehow childish, but that’s the truth. It’s a dream come true for me, and I feel so much gratitude towards everyone who voted for me.

Continuing with my vulnerability for a moment, I find this award extremely validating because I’ve always worried that people don’t actually like me as a model and are only putting up with me because I’m there. I know that there are always going to be some people who don’t like me, but it makes me really happy to know that there are quite a lot of you who do. So thank you for liking me! You put a smile on my face!

I’ve been a spanking model for a little over three years now, having done my first shoot in September of 2011. I’ve done hundreds of videos, shot for 40 some spanking sites and clips stores, worked in three countries, lived out of suitcases for up to two months at a time, met almost almost all the people who I idolized in videos before my modeling days began, made great friends with many of them and, of course, fell in love. I’ve learned so much about myself, and I’m proud of the ways that I’ve grown throughout the process. It still sometimes feel surreal to me. I feel so fortunate to get to have all these experiences, and I can’t wait to see what the coming years will bring me.

I love what I do so much, and I love connecting with the spanking community. Thank you all for making it possible for me to do this. I will do my best not to get too mushy, but I appreciate all the support that I’ve gotten over the past couple of years. Whether you left nice comments on my pictures and videos, bought my content, listened to me spazzing out when traveling was stressful, rubbed lotion into my butt after a tough shoot, calmed me down when I worried that I was the worst spanking model ever, gave me a place to crash when I was on the road, encouraged me to be myself, told me you were proud of me or any other amazing thing you did, I appreciate it so much.

As an interesting side note, I did a little bit of research as to who else has been Spankee of the Year and I discovered that it’s actually a very small group that I’ve joined. Since 2007, there have only been five different models named Spankee of the Year: Samantha Woodley in 2007 and 2010, Amelia Jane Rutherford in 2008 and 2009, Ten Amorette in 2011, Sarah Gregory in 2012 and me! This makes me feel even more honored to have been selected.

At the end of the day, I know that this isn’t a huge deal, and the world is no different than it was before I was given this award, but it still helps to cheer me out of most funks to think about it, and I still can’t really believe that I won. I feel a little overwhelmed by all the things that have happened recently. My book has been well received, I won Best Creative Spanking Blog again and now this! I keep worrying that I’ve been asleep since December and this is all a dream!

I hope that 2015 is a great year full of lots of spankings! It’s been off to a good start so far, having already shot for Good Spanking, and having four more shoots booked for the coming months already, so I have no plans to slow down.

Thank you again if you voted for me. As soon as I get a chance, I’ll be making you guys a special thank you gift. ❤︎

Hey guys,
I’m in New Jersey right now, visiting my family of origin. Unlike last year’s winter wonderland, things have just been cold and drizzly. Being here is a mix of being very relaxed and lazy and also being a bit stressed and sad. It’s hard not to focus on the things that I’ve lost here, but when I enjoy the positive, I can have a good time. I’ve been having pretty much the worst possible sleep cycle ever since I’ve been here, though. My body just wants to be nocturnal, and I keep grumpily struggling against this. Since I’m home, I obviously don’t have any exciting spanking stories to share with you, although I’ve certainly had it on my mind whenever I’m alone!

I’m really overjoyed that people are buying and reading my book, and it’s been especially exciting to me to have my friends read it and enjoy it. If you haven’t done so yet, I hope you will consider doing it! It’s not expensive at all, and it’s super hot, in my own personal opinion! I’ve had a lot of people asking me if it’s going to be available as a paperback, and I think the answer is that it probably won’t be. You don’t need to own a kindle to download the book, though. You just need to download the free kindle software for your computer or phone. It’s super easy, and you can immediately start enjoying my naughty novel! Click here to buy it for less than five dollars and to make me smile!

Another piece of big exciting news is the fact that I’ve been nominated for Spankee of the Year! When I first started doing videos, I kind of idly daydreamed about winning this award, and it’s super exciting to have been nominated. It’s a contest, so I would really appreciate anyone who is willing to go and vote for me!

The whole thing is made a little bit problematic by the fact that a lot of the other nominees are some of my best friends! It feels weird to be competing against people who I know and love. A lot of us have the same friends, and it puts them in an awkward situation of having to decide who to vote for. So, I’m not going to let myself get TOO competitive, although I must admit that winning would make me a happy girl indeed. I’m just pleased to have made it this far!

I guess a big part of the point of this post is that a lot of things that have been happening in my life these days are beyond my wildest dreams. I never thought I’d be able to “make it” as a spanking model, let alone be nominated for this prize! I doubted myself all the way through my writing process for The Doctor’s Little Girl, worrying that no one would read it and that those that did wouldn’t like it. So, I’m really pleased with myself, in a way that I don’t feel guilty admitting. I’ve always struggled with self esteem issues, and both these things have been extremely validating.

I have been working on a couple of other posts, but the holidays make me way too distracted. I’ll get there, I promise!

I started to write about some of the more dreary things that are going on in my family life and the sadnesses that Christmas time brings up for me, but I decided against it. I’ve got to keep myself positive. So, I’m going to try to get a little sleep and then when I get up I’m going to bake cookies and wrap presents: I’ll force myself to get the rest of the way “into the spirit.”

I hope you’re all having a good holiday! ❤︎