I’ve had a hard time keeping up with my blogging recently. This is largely because I’ve been working very hard trying to get another spanking related internet project (which I will hopefully be finishing and launching before the end of this week) off the ground. I’ve had a lot of technical difficulty but I’m a very proud person and I’ve been insistant on doing all the work by myself instead of seeking help. I’ve done a lot of other great things recently that I can’t wait to share, but I have to slog through them one at a time.
Today, I will be telling you about my third time shooting with Lily Starr Spanking. I’m very fond of Lily and her boyfriend, Robert Wolf. They drove out to Los Angeles from their location in the desert in order to shoot with me and with Erica Scott the next day. Unfortunately, NOTHING went right about getting to the shoot. It’s a ridiculous list of things that became problematic. It would have been a night of wacky hijinxes if I hadn’t been tired and desperately wanting to arrive at my shoot so instead it was a night of sad problems that annoyed me and were almost funny, but not quite.
I eventually got to Lily and Robert’s hotel room in the middle of the night. They were quite happy to see me and we talked and joked for a little while. We then filmed our first scene. It was an F/F scene where Lily discovered some slutty underwear (given to me by Maddycake) in my drawer and got all irate about it. It was a lot of fun to film and I got to say some good, witty lines.
After this, Robert and I decided to do the most serious scene that I’ve done with them. It’s actually the most serious and personal scene that I’ve done to date. It’s a real scene between us, in which Robert gives me a super hardcore spanking for showing up late and for messing up my plans that day and other irresponsibilities. This scene is pretty severe and has a lot of real crying in it, but it also highlights the excellent rapport that the two of us have, and it shows a lot of affection on his part afterwards. I should hope viewers will be able to tell that it was extremely relieving for me to be spanked in the way that I was during that video, and it was an experience I was really glad to share with Robert, because he’s awesome. 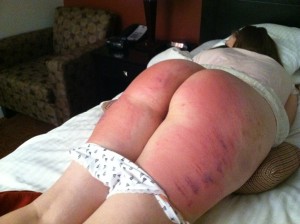 After shooting, Robert told me that there were a few times when he felt a little bad because he was hitting me so hard and almost laid off the intensity a little bit, but then he thought “Wait! This girl lives with Malignus!” and kept going. 😛 True. Story.
When we were finished, my pillow was wet with tears and makeup: 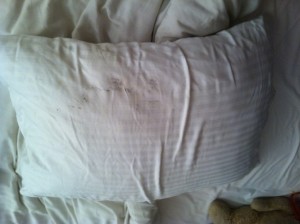 And so was my face!

I can’t wait for Lily to post the clips and to share those with you! Stay tuned for more updates!