In January I made this post detailing what kind of comments I frequently received on Fetlife that I did not appreciate. This post created some controversy, because people don’t like to be told that they are doing something that pisses others off. I actually lost a friend because he said that I was too picky about comments. -_-

Fetlife comments that are annoying, not appreciated or offensive continue to be a problem. I’ve branched out to notice several new types of annoying comments. Here is the updated list. Please note that this post isn’t exactly sweet and positive. If you don’t like this or you have some kind of delicate sensibilities and can’t deal with me using “harsh language” then I suggest that you skip this one.

1) Creepily sexual comments.
I’ve already pretty well established that excessively sexual comments from strangers make me, and NEARLY EVERY OTHER GIRL ON THE INTERNET at least somewhat uncomfortable. I do acknowledge that there are some girls who get off on the idea that a stranger wants to put his tongue in them for hours, but those girls really aren’t the majority. I’m moving on to include “creepily sexual” in this category, because those are even worse. Topping this list is the comment “I hope you are looking forward to me sneaking up on you to give you a good fuck.” I hope the commenter is looking forward to me stabbing him the throat in self defense. Strangers being sexually forceful isn’t actually hot. It’s just…rapey. In a bad way. In a “if this comment was a neighborhood that I was driving through, I would lock my doors” kind of way.

2) Sexualizing non-sexual pictures or trying to force a picture into a different fetish.
I know that Fetlife is about kink. It’s also basically where I hang out all day. I have more friends that I actually value, talk to and visit on Fetlife than any other place. Because of this, I sometimes post pretty vanilla stuff to my Fetlife page. I try not to post things that are excessively “Vanilla and Unpopular” like pictures of what I ate for dinner or a photo of some rocks, but I do post pictures of me just hanging out and doing regular-person stuff that have nothing to do with kink. It makes sense: I do stuff other than get spanked. I wear clothes most of the time. My whole life isn’t one big spanking video. Sometimes, commenters don’t understand this. Once, someone commented on a photo of me and a friend (I think Heather) at a mall or something with “Did you guys have sex in the foodcourt?” No! We walked around and looked at clothes, talked about whatever we were feeling insecure about, drank an Orange Julius, tried some dresses on and then went home.
Another time, I posted a photo of a cake and someone commented that he wanted to jizz all over it. Fuck you people.

Popular among my friends is the story of a comment that was placed on this photo:

This is a picture of me that my good friend, Amoni took during an Alex in Spankingland themed photo shoot. At some point, I’ll be re-doing my blog to include some of these photos in the layout. I feel like this picture is fairly straight forward, especially considering that the next photo in the series is of me bent over that rock behind me with my bare, spanked bottom on display. I’m about to be spanked and I’m petulant about it.

According to a commenter, this is a photo of “a young school girl pissing out of doors.”
Oh. Ok. I GUESS I can see where you could kind of get that idea from. Maybe just a little.
Anyway, this became hilarious because I was amused by the syntax “pissing out of doors” (when he clearly meant “outdoors”) and did a literal demonstration (without actually peeing, of course) of what that looks like in my head: a girl opens up a door, stands in the frame, then thrusts her crotch forward in an attempt to piss out of the door. I imitated this a lot at Chicago Crimson Moon this October. I also got spanked for doing so. 😛

3) Complaints about pantie placement/what I’m wearing/how I’m posed/other details
I personally like panties a lot. I buy lots of cute ones, and I want to take photos wearing them. I love the way that my red butt looks sticking out from my panties. Often times, when I take pictures, I’ll pull my panties back up after a bare bottom spanking because I like that look. So. Many. People. Complain. About. This. It’s almost enough to make me not want to post photos of my butt to the internet anymore when I post a picture and I get comments like “that should have been on the bare” or “why did he leave your panties up”? It isn’t like I never post bare bottom photos. I’d say it’s a pretty even split. If you don’t like a photo with my panties up, go look at one with them down. Bam. Problem solved. Once, maybe a week after a photo of me having been spanked in my swimsuit was uploaded, someone commented on it saying “Could you take one with the bottoms pulled down?” Oh, yes. Let me go back in time to when I got that spanking and take a picture to your exact specifications.
I get these complains about lots and lots of things. “I wish your pajamas were dropseats.” “Next time, take a photo where you’re bent over the couch.” “Take pictures during the spanking, not after.” -_-
I usually just delete the offending comments and then move on with my life. One that I found particularly annoying was left on this photo: 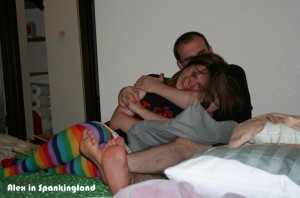 This is probably my favorite photo of all time, leaving aside a couple of pictures of me and my brother, and it’s certainly my favorite spanking related photo. Why do I like it so much? Because those moments when I’m worn out and crying after a long, hard spanking and Malignus is holding me and calming me down are some of the most special moments in my life, period. This is the only time when there was someone else there at that moment with a camera, so it’s the only photo that I currently have of this kind of moment. It’s also from the first time that I visited Malignus, before I was his girlfriend, before we moved in together and built the life that we have now. It just brings up a lot of positive memories. It always makes me smile.
Someone commented on it saying that it would be better if my socks were white.
dfghosdoghosiudghdfioughdiufghiusefhisuefgtsuygfidfgisufisufgisudfhisufhiosuediufgiuhijbdfsdfhs!!!!!!!HNUIU!

4) Comments not related to photo.

This is a practice that a lot of people are guilty of that I just find really rude: commenting on a photo to say something which is unrelated to the picture. One time, one of my friends uploaded a photo of her thighs after they were spanked and it turned into a giant discussion regarding whether or not thighs should be spanked. Another time, a different friend uploaded a picture of her being spanked by a play partner and several girls started using the comments there as a place to brat their Tops. People start having side conversations. Someone comments on a photo to say something that’s just about themselves and is only tangentially related to what’s being pictured. A girl uses someone else’s photo comment thread as a place to be disrespectful to someone who isn’t even included in the picture in order to get attention. All of this is just, in my opinion, unacceptable. If you want to talk about something like whether or not thighs should be spanked, start a thread. If you want to brat your Top, go write on his wall or IM him. If you want to talk about yourself, post your own goddamn picture. I’m not saying that my pictures are uploaded just so that people will talk about me and pay attention to me, but it’s still my photo, and that’s not the right place for your discussion. You can argue this with me if you don’t agree, but I really find that disrespectful to the person who posted the picture.

5) Your ass is too pale/Those marks are too much.

I don’t bruise like I used to. A really hard and severe spanking can leave me in a condition which photographs as “pink”. I’ve accepted this. Not bruising is convenient when doing lots of shooting: it means that I can do back to back shoots and never have to worry about asking Tops not to mark me. It just doesn’t always look as epic in the photos. People complain about this, or they diminish the intensity of the spanking that I received. “Nice warmup!” or “Off to a good start!” comments are always kind of snarky in a way that I don’t appreciate. On the other hand, when I *do* have noticeable bruises, there’s always someone who comments or otherwise points out to me that they think it’s “too much for their taste.” My spankings are tailored to me. I don’t upload photos from something that wasn’t a positive experience. If I’m bearing marks and I’ve photographed them, it’s because *I like them.* Aren’t you people ever satisfied?!

In general, I don’t like it when I upload pictures of myself and people talk about me like I’m not involved. “I like that girl’s ass.” “She’s got nice tits.” Those aren’t enough of a peeve to warrant me including them as a category here. What really bugs me is when I upload a picture of me in a group of girls and someone comments saying which one of us they like the best. This happens a lot with my Sternwood Academy pictures, or pictures of me hanging out with friends at parties. Someone will comment and say “The third girl in is the hottest!” or “I like the one on the left.” Nothing makes a girl feel great like saying “Your friend is hotter than you, I just wanted to point that out!” It doesn’t matter if the girl that they are singling out as “the hot one” is me or not. It just isn’t nice. Not to mention that the language used in these comments is often really objectifying. Harumph.

Because for the fast few months I’ve been trying to focus on the positive in life, I’m going to do a quick positive affirmation to make up for all the negativity in this post.

Also, I recently drew this as an assignment from YS. Pretty epic win, huh? 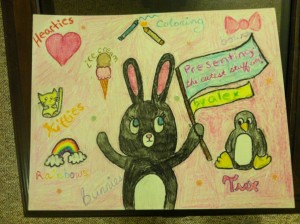