The Camden Pancake Incident, More Filming and Alex Buys Too Much Stuff

After having finished the two very exciting shoots that I wrote about in my last couple of posts, I spent a few more days with Pandora. The time that we spent just hanging out was always fun and enjoyable. We did sessions and had fun together. A huge portion of this involved me picking up her cat and not putting her down when she wanted me to. 😛 Eventually, though, Pandora needed to get back to the rest of her life, and I was meant to go visit S_F at this point. Unfortunately, his situation horrible personal situation had not improved, and he was unable to come get me or host me at his house. I actually didn’t end up seeing him at all, the entire time I was in England. Instead, Paul Kennedy and Lucy McLean were kind enough to agree to host me for the rest of the time that I was there. This ended up being basically the best thing ever.

Paul came to pick me up from Pandora’s, and we all had some tea and cake (although just regular cake, not Cake of Ultimate Joy™) before I had to say goodbye to her. I knew I wasn’t going to see her until BBW, which was about a month away, and this was sad for me, because I knew I was going to miss her. I hugged her a lot, and I harassed her cat as much as I could before I had to leave. As disappointing as it was to have to leave Pandora, I was excited that I was going to get to spend more time with Paul. I had found myself thinking about him pretty consistently since I left his house, and I was happy that I’d be seeing more of him.
When we returned to his house, I got to see his wife, Lucy, who I had only briefly met at Shadowlane last year. Lucy wasn’t feeling well that night, but being the horrible influence on my innocent friends that I am, I somehow managed to keep us up until the early morning chatting. Lucy is one of the coolest people to talk to ever, because she knows about an infinite number of things that I don’t know about, mostly lady things, and because she never makes me feel stupid or annoying when I have to ask a hundred and fifty questions about something. Additionally, she’s extremely kind, and I knew as soon as we finally got to sit down and socialize a bit that I really, really liked her and enjoyed being around her.

It’s hard for me to pinpoint the details of the time that I spent at their house and put it all in order. As before, I felt very relaxed and at ease while there, and the environment made me feel really free to be myself. Paul and I got to scene together pretty regularly, as well as just spending normal time together, and I found myself feeling very affectionate towards him– I think I spent the majority of the free time that I had while I was at their house cuddled up to him on the sofa. While it didn’t feel much of anything like the other D/s relationships that I’ve had, at one point or another I realized that I felt very submissive towards him, in a way that made me feel tremendously safe. Some kind of buffer of safety and comfort built up around me as we spent time together, and even though we’re away from each other now, it’s never gone away. In certain ways I felt tremendously shy about it, but I was slowly realizing that this feeling was greater than just affection, or caring or any other words that I might use to describe it aside from love (spoiler alert, we’re in a relationship now). But I didn’t entirely come to this conclusion until after I had returned home. At the moment, it was just a very happy time, in a place and with people that made me feel very contented.

One day near the beginning of this particular chapter of my never-ending adventure, Paul took me into London for what was kind of originally meant to be a variety of tourism events including hanging out at Camden Lock and shopping, but which turned into exclusively that, because I was so enthralled by it. It was cold and kind of constantly rainy, but I just loved walking around and checking out everything. If you don’t know, it’s an area that’s full of kind of alternative stores and vendors and it’s by the waterfront. I obtained several adorable things here, including a couple of excessively cute bunny related things and my very own prefect badge, which is something I’ve always wanted. In a vintage store, I found and got to try on some actual school uniform blazers (the fancy type) but none of them actually fit me, largely because they were all designed for boys of various ages. It was still super cool to wear, and I hope that some day I actually can find a real, legitimate one that fits me properly.

Shortly after this, a series of events that I now refer to as The Camden Pancake Incident took place. During this incident, Paul got me a pancake from a street vendor. This was basically a sweet crepe, and, for Angelinos, it was served sort of similarly to the ones that I used to get at Four Leaf: folded up on itself in a paper cone. I got it nutella, strawberries and whipped cream, which was basically the best combination of things I could think of, and it was hot when it was handed to me, which pleased me greatly due to my constant state of being kind of cold in England. “Don’t make a mess,” Paul warned me as I started to eat it, and I kind of responded with “Yeah, of course, obviously” or something.

I then proceeded to make a bigger mess than I have ever made in my entire adult life.

Because the pancake was hot, all the nutella and whipped cream melted together into some sort of drippy, creamy, chocolatey goo that got everywhere. It got all over my coat. It got all over my dress. It got all over my socks and shoes. It dripped in a trail behind me. It got into my hair. I probably got it on Paul. It was just impressively messy. I tried to clean as much of it up with napkins as possible, but that had limited success. I was just a sticky mess for the rest of the day. Later, when we got back to the house and I changed to go to bed, I discovered that I had somehow gotten it on my skin under my dress and on my underwear, which doesn’t even seem to follow the laws of physics to me.

Sigh. I’m an adult, I promise.

That evening, we went to a bar where I got to meet Leia-Ann Woods for the first time. She was really peppy and very entertaining to talk to, and I was excited that we’d be getting to see each other again at Boardwalk Badness Weekend the next month. On every occasion that we’ve been together, I’ve failed to take a photo. F – -.

That evening ended in a lovely way, as Paul and I went to dinner, and then took the train back to his town (on which I was very sleepy). The adventure finished with taking a midnight ferry ride, which was theoretically really enticing to me, but ended up being super cold. Fortunately, Paul took me upstairs to a giant heat vent, which I stood under and filled my happiness meter.

That weekend, we filmed for Northern Spanking. I often go thru and give a long play-by-play which describes the scenes that were filmed during a shoot, but this particular one is under-wraps. I’ll just say the following things:

* Besides me and Paul, the films involves Stephen Lewis, Michael Stamp and Zoe Page. There’s something incredibly, indulgently enjoyable about having four tops all to oneself.

* At one point, I wore this fancy outfit, courtesy of Lucy, who besides being amazing herself has all the most amazing stuff to wear ever: 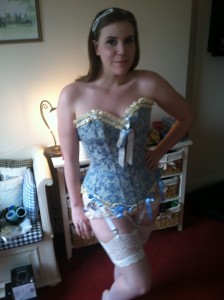 * While we were planning out one of the scenes, Paul sat in this tiny chair, and I think this is the most endearing photo ever. 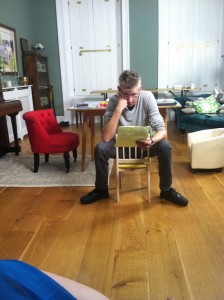 * Zoe dressed up as a cat and I somehow still managed to take her somewhat seriously. 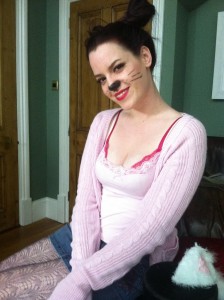 * It became obvious to everyone that I don’t really know my left from my right particularly well and that I’m horrible at singing.

* Some parts of this were ridiculous.

The final adventure that I shall detail in this post involves Primark. I don’t think most people in the US know what Primark is, unless they’ve been around me recently and have asked me where I bought something I was wearing. Primark is a stylish (“fashion forward” I think is the term) but inexpensive store in England. A lot of the styles that they had were very “me.” They had an enormous selection of underwear and pajamas.

I bought all the things.

I’m almost ashamed to post a photo, because I feel like it makes me look a little awful, but I’m going to anyway.

Lucy and Zoe took me, and they were the best people I’ve ever shopped with. They were never annoyed at me for spending so much time, and they helped me try things on, and they told me when things did or didn’t look good on me, they carried stuff around, they took stuff into the dressing room for me… it was just amazing. Lucy fitted me for bras and I finally got some that looked appropriate on me AND are comfortable. The second trip involved me learning what kind of jeans actually don’t make me look stupid, and I’ve actually taken to wearing them fairly regularly (one of those developments in my personality that some people continue to be flabbergasted by). After the shopping adventure, I tried on literally everything in a fashion show, including every single pair of panties that I bought, which I think numbered at least 50. This whole “Alex bought all the things” event lead to me being kind of annoying to my friends at home when they want to know where I got something, because basically all the clothes I wear now come from this exhibition. This also lead to me promising not to shop for two months after coming back from England, which lead to me consistently getting myself a variety of forms of trouble, but most of that is another story.

10 Responses to The Camden Pancake Incident, More Filming and Alex Buys Too Much Stuff