There have been a lot of people posting all kinds of romantic and interesting stories about their Valentine’s Day celebrations and spankings and such things. Compared to some, mine was extremely simple. We’re going to celebrate things more this weekend: on Tuesday, Malignus and I both worked evening shifts. Unfortunately, the night before, neither of us got much sleep. Our original plan was to celebrate Valentine’s day earlier in the day before we went to work. I was extremely sleepy when Malignus woke me up, but less so after he gave me a very spontaneous but thorough “wake up caning” with a 1/8″ acrylic cane. Spontaneous spankings are very hard for me to be submissive during, because they go from “I’m doing nothing!” to “I’m getting spanked!” at an extremely high speed and therefore don’t leave me much (any) time to get into a submissive headspace. Still, I did a fairly good job of being still for it. I was wearing my pajamas still when I started getting caned, and about halfway through, Malignus pulled the bottoms and my panties down to cane me on my bare bottom. I rarely ever get bared by someone other than myself, so it had a strong psychological effect on me and brought me into a sort of warmly submissive headspace for the rest of the scene. This is a lot of writing about a very short thing: he caned me at a very fast pace and it didn’t last long at all, but it made me feel happy and loved, and was therefore certainly worth sharing.

After a little while of being awake, we decided that we didn’t want to go out that day after all because we were feeling excessively sleepy. First, though, we spent a little while hanging out in the bedroom and watching TV. We were in high spirits and Malignus was in a creatively sadistic mood. While I was only wearing a t-shirt and panties, he told me to hand him a short cane. He told me that he was going to hit me on the arm with it (he occasionally hits me with little force on my upper arm). I made a scrunchy face but braced myself for this. Instead, he hit me on the front of my thigh. That’s one of his favorite “games”: hitting me where I don’t expect it. Then he hit me on that thigh again. Then he hit me on the other thigh. Then I cried. Then he gave me a few rapid fire strokes on the back of one of my thighs as I was rolling around in pain. This particular cane is one that doesn’t get used as often as others, I think largely because it’s a shorter cane. I rarely ever get caned while OTK (although the first few canings I got, including very extended ones, were done that way) so my two shorter canes get less use than longer, more intimidating looking ones. The one that was selected on Valentine’s Day was an 18″ Tearjerker JR Delrin Cane from Cane-iac. It’s actually one of the first canes that I owned. Scotchgrove purchased it for me for my birthday. It’s one of those things that doesn’t look all that scary when you see it lying there: 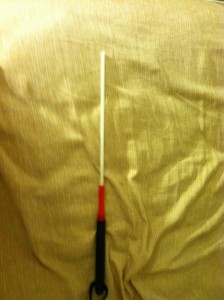 Then you get hit with it a few times…. 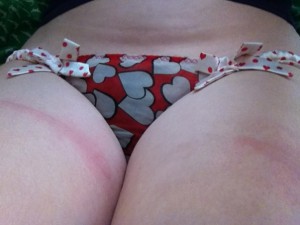 and suddenly it’s very intimidating indeed! The thing that I find the most amazing about this cane is just how much the welts raised after just a few moments:

Another interesting thing about it: from time to time, cane strokes will break the skin a tiny bit or leave a little blood blister where the tip hit. For whatever reason, probably something good about the design, this cane just left a larger welt on the tip instead of a cut. That’s much nicer and probably better for people who don’t want to get broken skin. The marks kind of looked like this: •­­­­–––. Another nice thing (in this situation) was the fact that it’s a very stingy cane that isn’t particularly weight-bearing. This meant that I didn’t get as crazy of thigh bruising as I did the first time I got my thighs caned (which was with an acrylic cane.) It still hurt. A lot.

Finally, when we were playing around Malignus said something to tease me and I responded with “I’m going to poison your sandwich!” After he finished hitting me with things, he did indeed ask for a sandwich (that’s my usual aftercare: making him a sandwich :P). I had a bunch of kitten stickers left over from making my Valentine’s Day cards for my friends, so I stuck one on the top of the sandwich to be the poison. I felt very clever. Malignus responded by setting the sticker on fire in a candle. SAD FACE!

After some cuddling, we napped and then went off to work. I spent the rest of the night feeling contented, warm, loved and sore. It was a lovely day indeed. 😀