I haven’t been online for a few days. I’ve let messages sit in my email and fetlife inboxes. In fact, until last night, I hadn’t so much as touched my laptop for 72 hours. Now, that’s unusual. Why? Because, first of all, I’m addicted to the internet. Secondly, I love my laptop. It’s the first computer of my very own that has actually worked well. My first two computers (“Lappy” and “The Craptop” respectively) could never do anything right pretty much ever and were in and out of repairs all the time. I bought this machine in 2007 and have never regretted it. With the exception of the power cable that died while I was at my mother’s house over Easter last year and had to be fixed with tape and later replaced and the keys that are missing from my keyboard from over use, nothing has gone wrong with it in the past five years.

This means that my dear Shenandoah Puff Octopus Prime (who still has a shorter name than my legal name!) has never spent the night in the shop, and therefore, the only time I’ve gone this long without using the computer since 2007 was either when I was in the hospital or when Serious_Face grounded me from my computer for four days because I said that I was more interested in looking at this than listen to him talk more about the differences between Greek and Roman coinage. (Men in my life are always over reacting!)

Also, while we’re on the subject of SPOP, this is what the front looks like: 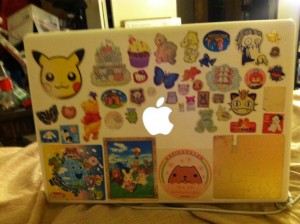 Whoever comments and names the most characters/cuteness franchises represented here will get a Cuteness Appreciation Award and public recognition.

What has been keeping me away from my beloved? I’ve been working (at my job) quite a bit recently, but I’ve been sleeping poorly and constantly feeling run down. I’d come home from work or wake up in the morning and want to do nothing. I spent my free time this weekend entirely lying around and watching TV with Malignus. He even surprised me and came to pick me up from work and take me to go watch a movie and I was like “Just take me home for bed! I am going to die! My legs are going to break off at the knee and that would be sad!” (which made me feel like a total cuntmuffin but was absolutely the truth.)

I felt icky and gross, but I had not yet reached the point of True, Undeniable Sickness®: I still wanted to be spanked. So yesterday, I asked Malignus to spank me before I headed to work and then eagerly climbed over his lap. He spanked me with his hand, which does not mean that he went easy on me. I love hand-spankings because they’re at the very core of my kink and they feel so close and connecting, but in a lot of situations, one sacrifices the amount of hurt for that comfort. Except with Malignus. When he wants to, he makes a hand spanking hurt more than many other people’s best efforts with a hairbrush. This was what happened yesterday: he spanked me crazy hard and fast and left me crying out and gasping. When he stopped, he told me that was my warmup. I had a very scrunchy face. He then did the same thing to my thighs, and told me that was the warmup for my thighs. I was already on the verge of tears (which is really not surprising considering that he’s made me cry with a single swat from a dishtowel) when he directed me to get up and get over the bed. He then proceeded to give me a very quickly paced caning, covering both my bottom and my thighs, which left me crying very hard indeed.

When I sat up next to him to hug him, though, he started hitting the front of my thighs with it, which is a very mean thing to do. I think that the main reason he’s so crazy about hitting the front of my thighs is because he gets to look at my sad and pathetic face while he’s doing it, and because it hurts so much, it’s EXTREMELY sad. He started hitting me a bunch and I sat there crying and sobbing and doing what Ami calls “screaming like a dying monster.” He then stopped and I finished my crying and he would start again to make me cry a bit more. He then gave me the most difficult of instructions ever: “Don’t cry.” He returned to caning my thighs (they weren’t full strokes, mind you, but the amount of sting was ridiculous) and I tried my best not to cry. It didn’t last long, though, because Malignus collapsed on the bed and literally rolled around laughing. Apparently my sad face while trying not to cry was the saddest he’s ever seen me, and it filled his sadistic, little heart with such glee that he was “happier than he’d been in a long time.” We will eventually be recreating this on film for your viewing pleasure. I know it’s been a good scene when it ends with me crying and him grinning uncontrollably. It just makes the world feel right.

I don’t like going to work on the weekends, but the day went by very quickly when I was covered with welts and bruises. I felt warm and safe and loved. That said, impact play actually CAN’T cure all problems (WHO KNEW?!) and about halfway through my shift I started coughing and sniffling. By the time I got home, I felt about half dead. The mystery of why I’ve been so run down was finally solved: I was slowly but surely getting sick.

It’s actually good timing: I’m going away this weekend, so this means that I’ll be better by the time I leave and I won’t be likely to get sick again while I’m there. More details on where I’m going coming soon.

For now, though, I’ve been spending my time coughing and snuggling in bed with my Pikachu. I basically feel like this:

Hopefully, I can get back to my usual posting schedule. If I can stay awake long enough to write.