I love getting comments on stuff. Comments on my writing, comments on my photos, comments on my blog (wink wink!): all of it makes me happy. There are certain kinds of comments, however, that never fail to produce this face: >_< . It’s my guess that others feel the same way. Being the careful researcher that I am, I’ve complied this list of “Comments Most People Don’t Enjoy.”This isn’t to say that these sorts of comments are NEVER acceptable, and are sometimes quite funny when used jokingly between friends. Please feel free to add to the list, or to protest my judgement. I want to add that I’ve never gotten a comment on my blog that was annoying or inappropriate in anyway. It is not my intention to make anyone feel uncomfortable or judged. Thanks.

Type 1: “I want to have sex with you” comments.
This kind of comment gets deleted immediately. I haven’t had any on my writing ever, which is kind of disappointing. If someone wanted to throw me on a bed and fuck me based on the quality of my prose, well, maybe I’d smile at that. I get a lot of comments from strangers on my public fetlife photos stating what things they want to do to me, and they never fail to make me displeased. “I’d love to spank you” is always ok with me. “I’d love to put my tongue in you for hours” makes me block you. The more words you use, the worse it gets.

Type 2: “I could do better” comments.
These comments appear on photos of a freshly spanked bottom and say things like “If I had spanked you, you’d be purple!” or “Where are the bruises?!” or “That was a nice warm-up.” Hot damn, people! Not every spanking has to be a murdering! Besides, some gals just don’t mark anymore! I personally get these kinds of comments rarely, because I don’t post a photo unless I think it’s worth showing off. Once in a while, though, my bruised and reddened bottom isn’t enough for the peanut gallery. I got a comment on the below that said something along the lines of “If I’d have spanked you, you’d be purple down to your knees.” I don’t have the exact wording anymore, because I deleted it out of frustration. I’m glad to say that the poster never spanked me 😀

Type 3: “Your [body part] is [size]!” comments.
Sure, sometimes, when I look at photos on fetlife, I think to myself “Damn, she’s got a tiny butt!” or “Holy cow! I bet that having breasts like that is uncomfortable!” but I never, ever post these things as comments. Why? Because commenting on someone’s body is just rude, even if it seems like a positive to you. I get body part comments ALL THE TIME. “You have a huge ass! So spankable!” is not a compliment to me. Nor is “Pretty ass but it’s so tiny!” (I got both those comments on the same photo):

I’ve been told that I had way too much “boob mass” to be pretty, that I should get implants, that I should be ashamed of my stomach and that have a perfect, Rubenesque figure. At the end of the day, it only matters if one person likes my body, and that’s me. I know my figure isn’t perfect, but people only have the right to offer their opinion on that if I ask them for it, otherwise, they’re being rude.

Type 4: “What did you do?!?!?!” comments.
It never fails. I post a photo of my butt after a spanking, and someone asks me what I did to deserve that.
Yes, I get disciplinary spankings. They’re hard. They hurt. I cry a lot and feel sad. Even if I photograph the results of such a session, I don’t want to announce that it was such, because I find discipline to be a very private thing, and I don’t want to get positive attention for my bad behavior. Yes, I tell my sisters and best friends when I’ve gotten myself into trouble, and I could see myself potentially blogging about it if the situation had some underlying lesson about DD in general or something, but I don’t want to publicize it to the world every time I’ve been a disappointment.

Secondly, I don’t just get disciplinary spankings. I’m from the “spankings are for everything” camp. I’d say that only 1 in 10 spankings I receive is for corrective purposes. It’s silly to assume that I did something bad because I got spanked. I’d say a quarter of the time, the reason that I got spanked is because I asked for it really nicely. My dynamic is far more complicated than “discipline only” and I play with a bunch of other people, too. And geeze, don’t I act good on the internet? Next time someone says “What did you do?” I’m going to respond with “I got spanked. Duh!”

Type 5: Comments that assume annoying things about me.
I’m cute. I get that. People want to hug me and stuff, because I’m cute. I went out on Halloween looking like this: 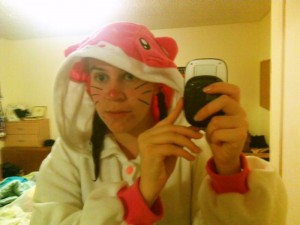 I’m not “a little.” I’m not into ageplay. I get comments assuming that I am all the time. I get “Your daddy is a lucky man” pretty often. Yeah, no. Are you talking about my father? Because he’s in prison. Not so lucky.

Then there are the posters who say “Just a spanking? I’d give you a good long single tail whipping!” No, thank you. I’ll also decline having my feet beaten, being blindfolded, having my tits “destroyed”, having my temperature taken rectally and a dozen other things that I’ve had offered on my photos. Your kink is totally cool with me, but mine is spanking, and that’s pretty much it.

Type 6: “I like it better this way!” comments
The number one reason I get this type of comments is about my pubic hair: I alternate between having it and not having it, usually depending on how I’m feeling or particular work I’m doing as a model. I literally do not care what you think of my pubic area. At all. When I have it, I get tons of comments about how strange men on the internet don’t want to eat me out. I’m okay with that. When I don’t, I get comments saying that it makes me look like a child and they wish I would grow my hair back. I don’t know ANYONE who would change their bodily presentation because of the preferences of a stranger on the internet. I also get comments about how people like to see marks on my butt: “I’d prefer a little less bruising next time” and “It’s hotter if it goes all the way down to your knees” have both been left on my photos. Right. I’m going to tell my tops to make sure to satisfy strangers online when we’re having a scene. No. Not happening.

We’ve all seen it happen: someone posts a photo of their butt after a spanking and someone else comes along and says that it’s dangerous. Mind you, there *are* situations where something is dangerous: if someone doesn’t know where kidneys live and is belting a girl in a way that’s probably going to make her pee blood, that had ought to be pointed out. If someone is missing all their skin from the waist down, they are probably going to require serious medical attention. There are areas that some people don’t agree on: some spankos are opposed to the hitting of thighs, some are into it. Some spankos think that wrap is evil, others are okay with a little. Friendly comments about that stuff is pretty normal and actually nice. Because I operate on Risk Aware Consensual Kink practices, I appreciate any additional risks being pointed out to me. What I hate are people who freak out for no reason.
“HE SPANKED YOU WAAAAAAY TOO HARD! THAT IS NOT EVEN SAFE! YOU’RE GOING TO DIE!”

Apparently if you get spanked too hard you can get a blood clot which will then go (somewhere generally unspecified in the comments) and make you dead. This condition is known as Sudden Butt Death, and as the name suggests, it’s extremely fatal. I know that this is true because someone that’s a Nurse’s Aid said so on the internet.

It’s okay not to like hard play. It’s okay to be grossed out by photos of multicolor bruises and blood and plasma leaking all over the place. But seriously. I don’t think anyone has ever died from a spanking.