It’s been a little while since I posted: long enough, in fact, that I’ve earned myself a spanking. Maybe I’ll film it and post it here. That would be fair, wouldn’t it?  It was my intention to do a Thanksgiving post, but holiday posts are always difficult for me because I am busy celebrating and don’t want to tear myself away from festivities to sit in my office and write something. This post, however, got significantly away from me because I’ve been keeping myself as busy as humanly possible recently, although half of it has been with epically fun things. But I’ve started this, so dammit, I’m going to finish it!

Thanksgiving this year was significant for a fistful of reasons. For one, it was Paul’s first Thanksgiving ever, which made it special! It was also our first real holiday together as a couple: we were together on Halloween but I had a horrible ear infection (I know, adults don’t usually get those. Read what you will about me from this, I guess) and we had to spend the night quietly at home. Finally, Thanksgiving was the last day before Paul left to go back to England for a couple of months: he’s gone until February. As such, it was important that we spend lots of positive time together before he left!

Our Thanksgiving was certainly a bit non-traditional. It was our original intention to go to my mom’s house for the holiday, but since Paul had to leave the next day, that was already sort of in question. Then my mom fell and broke her hip, and she’s been in a recovery facility ever since so she didn’t want to have a bunch of people visiting. My mom and I have had a difficult relationship over the years, but it’s been much better recently. That said, she’s had an awful few years. Two years ago last month, my oldest brother passed away from AIDS. Last October, my family home was swept out to sea in Hurricane Sandy and we lost pretty much everything. My mom was displaced and living with friends for over a year. Just as she was getting ready to move into her new house, she fell and broke her hip. Add on top of this the fact that she has Lupus, and it’s remarkable she makes it through the days. Anyway, I decided to go visit her in a more low-key environment later because that worked out much better for everyone. So, on Thanksgiving, Paul was not introduced to the madness of my extended family which meant that no one got ridiculously drunk, no one tried to sell us Avon products, there were no pregnant teenagers, everyone was properly showered, we had one pie instead of eight, nothing was cooked in a coffee can and all persons at the dinner table believed that the Earth rotates around the Sun.

It also meant that we could just be ourselves, and do things the way we pleased to instead of the way we were “supposed to.” This meant that before I even started cooking dinner on Thanksgiving, I had a Final Exam. This started months ago, during our trip to Colorado, with a book about Bears. I’m obsessed with bears. Obsesssssssssssssssssed. I just think that they’re the cutest animal ever. The fact that I visited a bear park on multiple occasions and even got to pet an infant bear cub has only increased my excessive fondness. When we were staying in the mountains, it was my greatest hope that I would encounter a bear (at a safe distance, of course). We never did, although we did see some adorable wild elk with fuzzy, velvety antlers and a couple of gophers/woodchucks/groundhogs/generic small chumbly creatures. In place of a real life bear encounter, Paul bought me a book full of delightful bear photographs and chock full of important facts about my favorite fuzzy friends. When we were apart, I found myself reading it as I fell asleep and remembering our trip together, and soon my trivial and useless bear knowledge was getting excessive. Did you know that baby Black Bears (Ursus americanus) cubs spend up to 60% of their time in trees, and often nap or sleep up there? That some subspecies of the Brown Bear (Ursus arctus) include the Grizzly Bear and the Kodiak Bear? That the darkness of a North American bear’s fur is in direct proportion to the dampness of the climate in which it lives? I was probably insufferable if I got started talking about this. One day, a friend came to visit and brought up the fact that bears can climb trees (HE brought it up!) and I had to sit on my hands and force myself not to turn the next hour into Bearfacts o’clock.

So, it was decided (probably mostly by me, to be honest) that I should have an exam about bears. It would combine my never ending desire to play school with my new found obsession. Paul wrote the test and I studied, taking 12 pages of handwritten notes to review from. On Thanksgiving, I did a last minute cram before I donned a school uniform, got out my pencil case and sat at the kitchen table to write the exam: 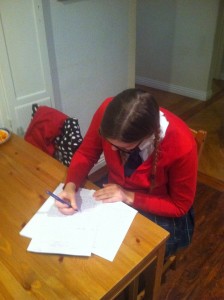 I’m wearing a tie. This makes me fancy.

Once I had completed a page of short answer questions and written a two page essay about the process of hibernation, Paul took my paper into his study to grade. Giddy from the fun I had with this sort of play, I then put an apron on (yes, right over my uniform!) and started to make dinner. Since there were only two of us, we ended up having a roast chicken instead of a turkey, but I made it with (what I consider) traditional breadcrumb stuffing. I also made mashed potatoes, carrots, corn bread and a from scratch apple pie. It was a feast for the two of us, and everything turned out wonderfully.

As I cooked, in the kitchen of my sweet little house, feeling happy and healthy and safe, I was very aware of how much I had to be grateful for. I live in a place which truly feels like my home and I spend my time with people who love me and with whom I can be myself completely. I have a job which I adore and which allows me to do the things I’m most passionate about while meeting and getting to know lots of new people. The weather is so warm that in November, I was still constantly getting scolded for walking outside without putting on shoes. I have my cats, and they’re adorable and make me happy. I’m in love with someone who loves me back, and who values and respects me and who instead of saying “Stop being so weird, Alex?” takes delight in the things that make me giddy and writes me exams about bears.

In a certain way, all this was bittersweet because the next afternoon, Paul would be leaving for 2+ months, and I certainly had the impulse to be a mopey moper about it, but I kept myself focused on the fact that my life was beyond what had been my wildest dreams and I’m glad for these things. Dinner was lovely, and afterwards, we snuggled for a long time while we digested. Later that evening, it was time for the Spanksgiving part of Thanksgiving. 🙂 By then, my feelings had built up quite a bit, and I felt delicate and vulnerable. It had been Paul’s original intention to have an intense and severe scene that night, addressing some of the issues that had remained written in my book and for which I had yet to be punished. I felt nervous and apprehensive about this, and I guess it showed in my reactions to things, because before I had a chance to bring up how I was feeling, Paul asked me if I still wanted to do a scene.

My initial response was “No, I feel too vulnerable.” This was accompanied by a lot of feelings. Sometimes, submission can be horribly confusing, despite all the time I’ve spent ruminating about it. On one level, I want my Dominant to make the choices about what happens. I’m scared of the accusation of topping from the bottom. I have a fear that expressing my feelings and desires for the way that we play will “ruin” things, that I should accept what I get instead of communicating what I want or need. I also have a tendency to feel embarrassed by my emotions, no matter what they are. None of this stuff is healthy, and I’m not proud to admit it, but these are things that developed in my brain over the past couple of years. As soon as I voiced my opinion, I started to cry and apologize, anxiously hiding my face. Paul pulled me up into his arms and spoke to me soothingly, assuring me that I didn’t need to feel that way and that he never judged me for what I felt or needed. As I tried to calm, I was surprised by how much of a need to cry was left inside of me. “I just feel like I’ll come completely apart,” I confided. After a moment, I added “Maybe I need that.” Ultimately, we came to the conclusion that I did need a hard scene, but not a punitive one, and we decided to do an arbitrary scene.

A bit later, Paul put me over his lap and began to spank me. It was probably not particularly hard, but due to my emotional state, I soon started to cry again. In the middle of it, he paused and asked “Who do you belong to, Alex?” and I melted into a passive and tranquil state. This is something that pretty much always works for me (when playing with someone to whom I belong, of course!) as it makes me feel owned, loved, cared for and treasured while simultaneously making me feel very passive, safe and small. I probably cooed my response.

Shortly after this, I got a caning. The strokes were hard and the cane in question is dense and bitey, and I had little resistance left to offer between my vulnerable state and my heightened feeling of submission. This didn’t mean I took the strokes well, though: I cried and wailed, sometimes sobbing so hard that I made myself cough. At one point, Paul had to pause to give me a cup of water because I think he thought I was choking. When it was finished, I felt warm and swollen, but entirely refreshed (once I cut through the haze of “I can’t brain!” that happens when someone tries to talk to me right after a hard scene). As I curled up on his lap, I knew that everything was going to be okay and that while I’d be inevitably sad and lonely while he was away, that I was always protected and I always belonged. ♥