The other day, I got something exciting in the mail: it was a package from my very good, online friend, bottomgrl. She had told me in advance that it was not a present, but a “prize” for being awesome. We’re weird like that. 🙂

I opened it in the car on the way home from the Post Office and discovered that it contained two absolutely awesome pairs of Halloween panties. I had been whining about wanting Halloween panties earlier, and these ones are pretty perfect for my needs: 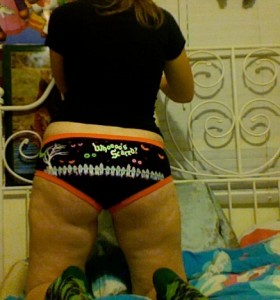 The photos aren’t great, because I took them in Photobooth on my laptop when no one else was home, but these ones say “Whooooooooooo’s Scared?” I intend to wear these when I’m feeling overly confident and slightly cheeky. What? Me? Afraid of a little spanking? Ha! 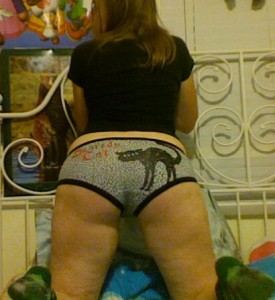 These ones say “Scaredy Cat” and they’re for those moments when I start crying at just the sound of an implement moving through the air: sometimes, I’m just not brave. 😛

I was totally overjoyed that she thought of me and presented me with this prize for my awesomeness.

Additionally, I recently got a package that I couldn’t immediately figure out who it was from, but which turned out to be from my friends who shall be referred to as Peach and IG. I met Peach through vanilla channels: she’s an absolute sweetie, and a total spanko, but she hasn’t reached the point where she’s comfortable participating in the community yet, even online. IG is her boyfriend and Dominant. He’s a clever and slightly intimidating garden-variety sadist; that is to say, he’s not a spanko. He’s certainly fond of spanking Peach, but it holds no greater enjoyment for him than any other method of inflicting pain on her would. I find their relationship very interesting in that regard: part of me has always thought that in a perfect world, spankos would partner with spankos all the time. I’ve learned that a variety of people make it work, either with a different type of kinkster or with an open-minded vanilla partner. Peach and IG don’t blog, but they are comfortable with me sharing some of their stories here every now and again, when I find them interesting or relevant. 🙂

Peach has had some very serious health problems for the past few months, and is currently unable to engage in any impact play (on her kink-friendly doctor’s orders). I can’t imagine how sad that would be: to be with your primary spanker and not be able to be spanked for MONTHS. I was unable to be spanked for a day and a half while visiting Malignus the last time because my skin got…a little messed up in places. I needed the time to heal. It drove me absolutely insane. I seriously cried when I asked to be spanked and he refused. It was one of those situations, though, where he thought of the long term and I was caught up in the moment. I appreciate being taken care of that way, even when it’s sad, and I know that Peach does, too: it’s just a hard time for her. IG has, in the meantime, found creative ways to be a jerkface to her without violating the terms set down by the doctor (some of which are so awful that I wouldn’t dare share them here or else they might get used against me), but it’s obviously not the same.

Despite the fact that she’s not doing particularly well, Peach has been an extremely supportive friend for me recently, and she’s been sharing in my joy and excitement about my upcoming move to be with Malignus, which I really appreciate. I really like having friends who can be glad for me even when they are sad for themselves. Probably a combination of Peach’s happiness and IG’s leftover sadism lead them to send me a gift from cane-iac: 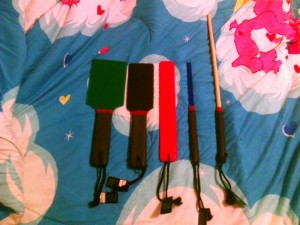 IG is fond of giving me slightly strange new things to experiment with: he’s the one who was responsible for that blue, rubber paddle that kind of looks like it was made out of a running track, among other horrible things.

This package included (from left to right) a green acrylic paddle, a black polypropylene paddle, a polyethylene “Smack” stick, a two strand mini-acrylic cane and an 18 inch rattan cane. I’m not entirely sure what the difference is between the three kinds of plastic: as far as I can tell, they are all just “not as mean as lexan.”

I’m excited to try them out, even if they are, as always, a bit scary. There’s something very enjoyable about getting beaten with something purchased or made for you by a friend, though. It’s as if their energy gets involved in the spanking somehow, because of the association.

Has anyone else ever gotten or given implements as gifts? Do you like the practice, or does it just seem like a physical way of throwing your friends under the bus?

Hope everyone is having a good weekend!

3 Responses to Presents/Prizes and Peach