A new scene involving me was just released, and I didn’t write about that shoot when it happened (it was during the very dark time of me never blogging, which I hope I’m proving to you is coming to an end) so I’m going to talk a little about it now. 😀

The scene is called “The Other School” and it’s newly released on Dreams of Spanking. We filmed this back in April (or was it May? One of those months) when I was lucky enough to have Pandora visiting me. The time that Pandora spent visiting was extremely fun. I was very much looking forward to doing this shoot: we had me, Christy Cutie, Maddy Marks and Pandora, plus Paul topping and my vanilla partner, Rafa, helping with camera and lighting. It was a fun day of shooting (half of it was for Northern Spanking and half for Dreams) with a bunch of really great scenes. One of the ones that I enjoyed the most was this one, though.

The plot of the video is that Pandora and I go to a very strict school and our best friends, Christy and Maddy go to a more lenient one. This is made obvious by the differences in our uniforms: Christy and Maddy get to wear fairly “grown up” looking uniforms, obviously not having gotten reprimanded for shortening their skirts, and can even get away with wearing high heels. The school that Pandora and I go to is much stricter, and we wear traditional white and navy uniforms (I’m in a gym slip and Pandora is wearing a skirt and blouse) with flat shoes and have to wear ties. 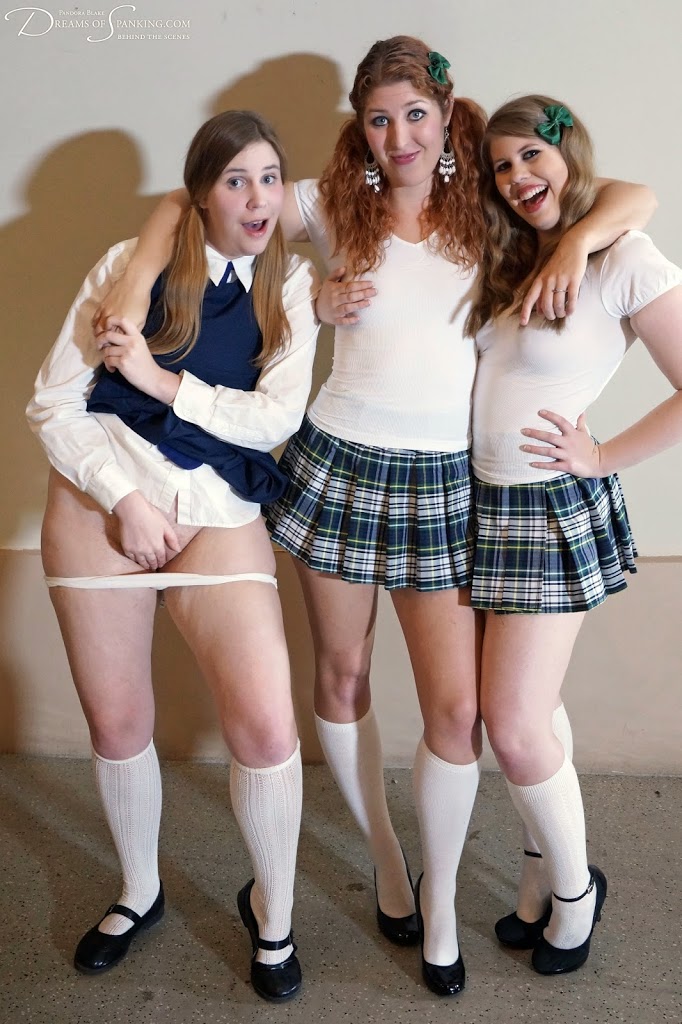 I don’t really know why I didn’t just get dressed again for this “behind the scenes” photo. Probably because I’m ridiculous.

After a scene showing the four of us hanging out and chatting, Maddy and Christy convince us to ditch our last period study hall to go hang out with them on Friday. They wear us down from “They will literally kill us, as in, I would be dead” to “well, I guess we are seniors now…” Maddy asks “what’s the worst thing that could happen?” and Christy suggests that we’ll get a detention another day. Of course, this is a spanking video, so I think you can guess what the worst thing that can happen is.

Obviously, this plan ends badly for Pandora and I, and in my nervousness as we wait to be caned I engage in a lot of excessive anxious hair twirling and the two of us whisper about our fears of what will happen to us next. We’re then interrupted by the stern voice of Mr. Kennedy ordering us in.
We filmed this little bit in just a couple of minutes, but it had a strong effect on both Pandora and I. When it comes to school type scenes, we share a lot of the same kinks, and this moment really played into it for both of us. Apprehension, formality, sternness, the bond between those being punished together… all these things were spot on for both of us. I remember after we filmed this bit, Pandora turned to me and said “Well, that’s most of my school kink summarized in two minutes” or something along those lines.

Maddy and Christy decide that they feel guilty that we’re probably in more trouble than they are, so they sneak into our school, peering into a door that leads to our gymnasium, where they discover that Pandora and I are getting beaten. They decide that they need to confront our headmaster and let him know that it’s their fault, too. The caning scene here was tough for me: I accidentally gotten a patch of broken skin a while prior to the shoot and it hadn’t healed yet (this is not something that usually happens to me and I was very freaked out by it) but I had still really wanted to participate in the scenes that we had planned. This one, particularly, was one I was looking forward to. Stern, formal school scenes are so close to the core of my kink, and I love doing scenes with a lot of girls in them, especially ones who I adore like these three! 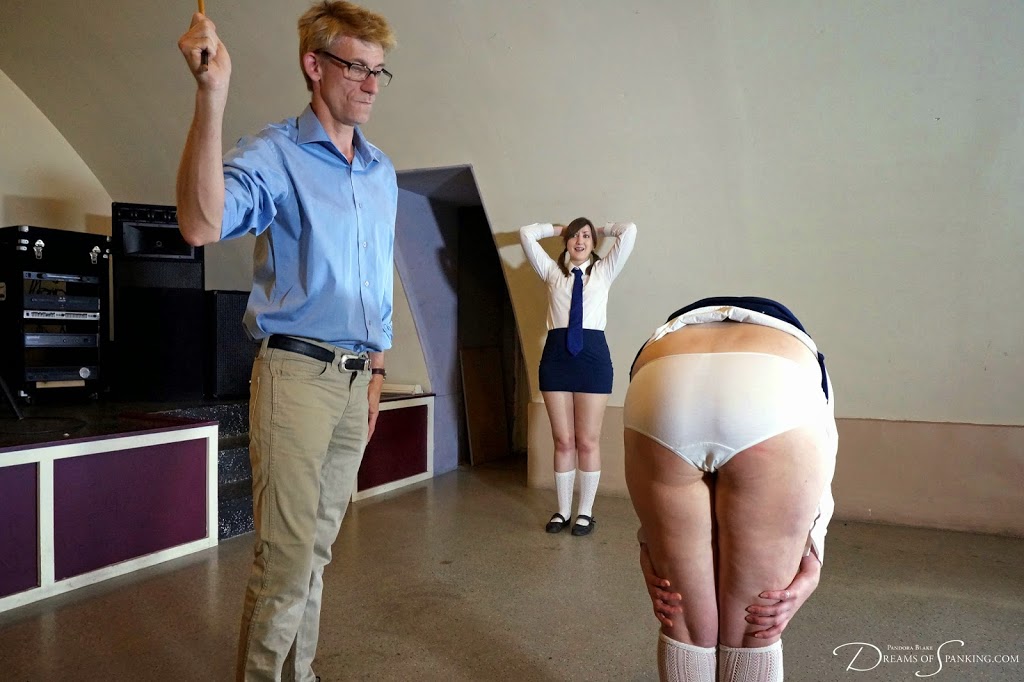 Paul didn’t go easy on me: the strokes cut and burned and bit the way that canings always do. I was deeply immersed in the scene and thinking about how I had gotten myself into so much trouble and how embarrassing it was to be getting caned (if you watch the film, my face is bright red when you see the reaction shots). When Paul and I do roleplay scenes together, we’re able to slip perfectly into the characters that we’re playing. I don’t know what’s going on in his head, but for me, I’m never aware of the fact that he’s my boyfriend and I’m head over heels in love with him. That foundation creates a huge amount of trust that allows me to give up control and just enjoy whatever we’re doing, but in that moment, I’m intimidated by him because he’s my strict and fearsome headmaster. And after that moment, I’m sky high with happiness at this phenomenon.

Anyway, back in the film, Maddy and Christy explain to Paul that they feel that our misbehavior was all their fault (while both looking adorably nervous) and ask to share the punishment. I really like this whole idea. A lot of the school stories that were the origin of many of my original fantasies focused on the “codes of honor” that students shared about protecting each other, and I find hearing Maddy suggest that they should be caned as well incredibly hot on an unrelated note. Paul agrees and lessens the punishment due to Pandora and I, dividing the 12 strokes we were each due across the four girls and therefore leaving us with six each. Although I was originally getting my strokes over my panties, once the sentence was reduced we wind up having to take them on the bare. Serious ouch. Group punishment means watching your friends get punished, either while nursing a sore bottom or worrying about what will be about to happen to you! I think I got off easiest since I got the first caning, since I didn’t have to worry about my own impending beating while watching my friends get theirs: 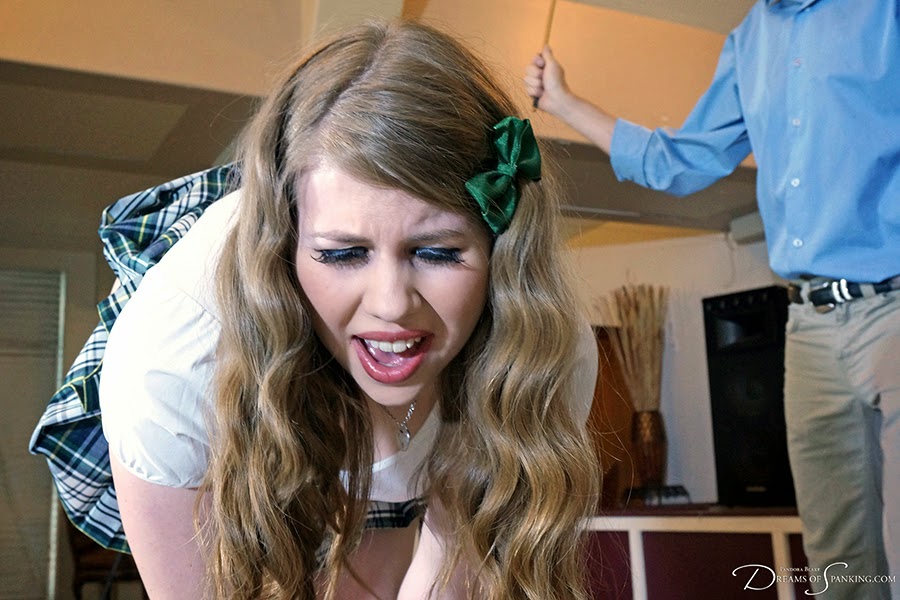 In the end, we were a sore and well striped bunch of girls: 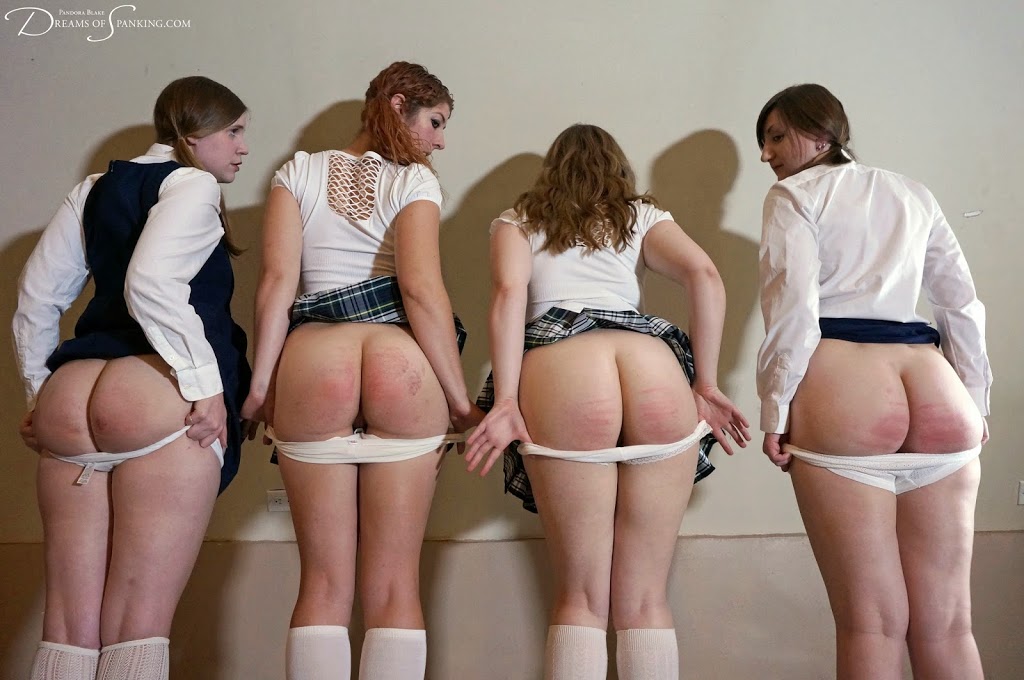 After we finished filming, there were cuddles all around and we enjoyed hanging out before going on to the next (and last) scene of the day. When we finished shooting, we went out to dinner to celebrate. All in all, an awesome shoot and a scene that I love. I especially appreciate that Dreams released a scene involving me and Paul right after he left: I often prevent myself from missing Paul TOO much by watching scenes involving the two of us. I can dive back into the memory of being there with him, plus, thanks to the miracle of spanking porn, I can hear Paul’s voice even on days when I don’t talk to him!