Where Has Alex Been?! Part 2

When I woke up the morning after, my butt looked like this:

On Saturday night, MaskofNormality, Princesstoy and I had dinner together at a Thai restaurant, where we were the only patrons and we talked quietly about kink things the entire time. We also had delicious coconut ice cream. Mmmmm! I already had my makeup on for my second costume, so it was a little strange to the waitress, I think.

From there, we went to the Bordello of Decadence: a play space in Rosemead. It was my first time there and I was really only going because it was a Halloween party and a lot of my friends were there. Pretty shortly upon arriving, I met up with my friend Porcelain Ass, who was dressed as a school girl. Princesstoy was dressed as a sailor girl and MaskofNormality was dressed as Max from “Where the Wild Things Are.” His was pretty much my favorite halloween costume ever. He made it himself and it looked EXACTLY like I imagined Max’s outfit would in real life. He even made fuzzy shoe covers. I couldn’t stop hugging him because it was so cute. I was wearing a pink hamster suit. It was fleecy and warm, though, so halfway through the night I stripped down to my panties and tanktop and ran around like that.

[I might be adding a photo here. I am waiting for permission from my friend who is also in it.]

I didn’t play at this party, but I did get to watch an awesome scene between MaskofNormality and Princesstoy. Princesstoy positively shrieks when she gets spanked hard! They were horror movie screams. MoN did an awesome job topping: he’s usually a bottom, but he totally pwnd Princesstoy, all while wearing his fuzzy outfit 😀 Epic. Win.

I was still super sore from my spanking yesterday, especially on the areas that were covered which were previously under-spanked: Sir Siq was able to get different “territory” because he was standing on the other side of me while I was over Maddycake’s lap. Sore bottom + fleecy pajama material = mmmmmmm. Positively cozy. The weather outside was cool and foggy and it made me look forward to this winter, when I can come in from the cold, get warmed up by a good spanking and then cuddle up in something warm.

I’d be lying if I said that BoD was a favorite playspace: it doesn’t have any private rooms, and I don’t think there are any places there where I would be able to get into a good headspace during a scene. It did, however, have a good layout for socializing and pretty nice snacks :). In all, it was certainly a nice play for a big party, but not somewhere that I would go with the intention of playing.

BoD is across the street from a graveyard, and as we were walking out the sky was a bit too light for the time of night it was, but the street was heavy with fog. It was perfect murder weather. That made the night even more Halloween-y.

On Sunday, Maddycake came over again and we did literally all the rest of my packing (except the things I’ll need for the next 10 days) and had lots of snuggles. I’m going to miss all the people I’ve talked about in this entry way too much. On a side note, Monday and today have been a bit gloomy for me: part of it is the drop from having spent the weekend surrounded by all my favorite Los Angeles people. Part of it is the weather: it has stayed gray and rainy over here. Part of it is the fact that now that all my stuff is packed up, my apartment feels weird and sad. There’s also the fact that I’ve been worrying about making friends and whether or not I’ll be liked in my new community once I move to South Dakota. I spent most of my life being awkward and generally unpopular, so it’s a hard worry to shake. I’ll be with Malignus, and that fills me with glee and happiness, but I’m going to need some other friends, especially girls who want to squee over kitties and cute fuzzy stuff (when Malignus isn’t around). I know a few people online and I’ve met a couple of people in person who seem pretty awesome, so hopefully things will work out for me in that department. 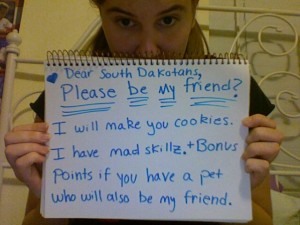 Finally, I’m shooting with Chelsea Pfieffer on Friday and Lily Starr again on the first of the month. Pretty exciting stuff!
I’m back to my regularly scheduled program, so expect posting to go back to its normal pace.
<3

6 Responses to Where Has Alex Been?! Part 2