Whew! The past week or so has been a whirlwind!
I just got back from my second spanking party, Chicago Crimson Moon, a few days ago, and I’m currently in Los Angeles.

I left Sioux Falls for Chicago on Thursday of last week. I hadn’t been feeling great for a few days leading up to it, and I felt so lousy in the morning that I almost didn’t want to go to the party, but I rallied and thought about all the fun and excitement waiting for me and I made it to the airport. The flight from Sioux Falls to Chicago was incredibly easy, and before I knew it, I was at the hotel. The excitement picked up for me when I got to meet Betty Crocker, with whom I’ve talked online quite a bit. We then ran into Morgan, and he let us hang out in his suite while he went on airport runs. From the pre-party time, Morgan’s suite was full of epic win, since Betty and I were hungry and he already had it stocked with snacks. I then got cleaned up and got into hanging out with people as they showed up.

Soon, a group of friends had assembled. My good friend, Missbehavin Megan was kind enough to put my hair into french braids for me. I’m not able to do anything even remotely fancy with my hair, and it was very cute indeed, so I was quite pleased with this. I also really enjoy having my hair played with, and having it styled gives me the same kind of “nice” feeling.

Later, I watched TNSpanker unpack his implement bag. He’s found some amazing pieces at antique stores, which kind of blows my mind. I’ve never found anything spanking related at an antique store, although I did get the famous Trout Paddle and a very vicious spagetti measuring device (I’d take a photo, but I’m not at home as I write this, and I have very few implements in my traveling bag with me and that’s not one of them) from the thrift store. Still, there’s nothing impressive about Trout compared to a vintage cat-‘o-nine! I guess Tennessee is just a great place to buy spanking stuff, or something! Then, having that wonderful sense of self preservation which I am so known for, I made it known to TNS that I’d never been spanked with a Jokari paddle, and he was ever so kind as to do that for me. I don’t know why a Jokari would be worse than other sorts of wooden paddles, but it seemed that way to me. It could be partially a mind-game: the whole collective entity of spanko bottoms are being subjected to mind-games about various implements all the time, because there’s this general idea that certain things suck, so we psyche ourselves up for them to deliver on their expected hurt and so they do.

None the less, the Jokari was rated as “I’m glad that we don’t own one of these” and my spanking with it was mercifully short compared to what it could have been, although certainly long enough that I really felt it.

A little later, my group of friends headed to dinner at a restaurant right near the hotel where the party was held. We had a very good meal, although the waitress declined to sing to Megan, despite the fact that I told her that it was her birthday, which is just bad form, in my opinion. It was her birthday(ish)! They should have brought her a cupcake and sang loudly to her. But the food was quite good, and the margarita which I was talked into getting was most enjoyable. When the waitress was taking care of us near the end of the meal, one of the members of the party commented that some noise sounded like “whipping.”

“Oh!” the waitress exclaimed, “it’s probably coming from the hotel over there. They’re having a whipping party this weekend!”

“Oh, really?” we all asked, without anyone giving it away that we WERE the “whipping party.”

“Yeah, I had another table earlier where they were TOTALLY OBSESSED with spanking!” she told us. We just laughed and joked about how unusual that was, although many significant glances were exchanged. As I got up to leave, she noticed that I had on a plaid skirt and added “You’d fit right in with that school girl skirt!” as I headed for the door. This made me blush quite furiously indeed.

I’m pretty sure that it was after dinner that I met up with James and Korey, an awesome couple who I had met very briefly at TASSP and who were amazing enough to let me and Zoey share their room. I really got to know them over the course of the weekend and had some fun conversations with them. They’re pretty much winners. They gave me my room key and let me get my stuff moved from Megan’s room to the place where I was going to be staying.

After that, it was time for the new member orientation, which I attended, since this was my first Crimson Moon party. At this event, I got to meet a lovely girl whose screen name is Whenshewasgood, who I spent lots of the party hanging out with, and her equally lovely boyfriend. Just like I found a group of younger people at TASSP, I was excited by the amount of young, freshfaced spankos were in attendance at CCM. There were actually people who were just eighteen years old exactly. The fact that there were also people in their late 60’s (or perhaps even 70’s, I’m not sure) in attendance at this party made the whole thing seem very special to me: there were literally people from all walks of life, all ages, backgrounds and levels of experience coming together because we are, as the vanilla waitress so perfectly put it, totally obsessed with spanking. I loved the feeling of being a part of something.

Pretty much immediately after the orientation, Mike, one of the organizers of Crimson Moon, took me into one of the little booths that were set up for semi-public play and gave me a spanking. It was one of those nice, long lasting hand-spankings, and although I whimpered and squirmed quite a bit, I really enjoyed it. We planned to get together for a longer scene later, but because we were both quite busy people, that never came to fruition. There’s always October for that, and I have no complaints regarding the scene that we did have! There really is nothing in the world like an OTK hand-spanking. It left me feeling warm and snuggly.

Even later that evening, there was a Naughty School Girl Party, which was similar to the event from TASSP. I participated in this one quite a bit more than last time, since I knew more people in the event and it was less enormous. I hadn’t really planned ahead for ways to be bratty in order to gain the teachers’ attentions, and I didn’t have any “bratting equipment” so to speak, but I made do: my primary method of doing this involved selling out other girls for their bratting, which resulted in them receiving spankings as well as me getting corrected for being a tattletale. This was most fun, especially because it was so far removed from my day-to-day character. I later adopted a second technique, which involved making fun of Angel (littleanglewings). She was one of the “prefects,” and I told her that she only got her position because her (scene) father, Yoni, was one of the teachers. She spanked me for questioning the authenticity of her post and its deservedness, which was a lot of fun. She’s a great spanker, which sort of surprised me, seeing as she’s kind of a small and diminutive girl. I didn’t learn my lesson, though, because I then made fun of her for being adopted (something which one really only can get away with in a situation such as this one: in the real world, that would be tremendously mean and I wouldn’t do such a thing).

I also ended up accusing Sarah Gregory of being inappropriate as a prefect, as well: something to do with her being too sexy for school, I think, and I got spanked by her for the first time. That was also a lot of fun: it’s always exciting to finally be spanked by someone after having been aware of them for a long time. Finally, at the end of the party, we all lined up to get spanked by each of the teachers. I stole Ten’s idea from TASSP and positioned myself at the very end of the line, so that the Tops would all be tired out by the time they got there. This didn’t really work: Miss Chris and Yoni, especially, really gave me smacks that I felt! We took lots of photos during and after this event, but I haven’t gotten any of them from Sarah yet, so I’ll be posting those at a later. In the meanwhile, here are the pictures that I took of myself whilst getting ready, because I’m like that: 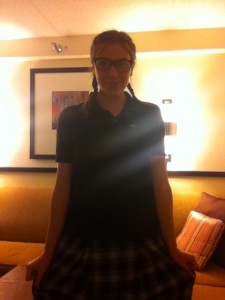 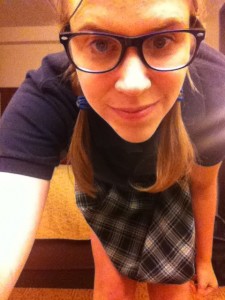 After this event, I hung out in the various party suites until the end of the night, doing the usual spanking party things: getting spanked, talking to friends and being kinda ridiculous. I started to bond with some people, and had a wonderful sense of being cared about and looked after when at one point I started to feel overwhelmed by being at a party all by myself, but a friend took me aside and made sure that I was alright. I honestly don’t remember anything else which happened on the first night. I know that Mila and Zoey all showed up eventually, and that Ten and Drlectr did not: they were delayed a day, much to my dismay because I had been waiting to pounce them. All in all, the first night was just great, and this was mostly driven by how wonderful all the people who were in attendance were. Sure, there were people that I missed: first and foremost, I would have loved it if Malignus could have been there with me, and I missed Heather a lot, and I consistently tried to figure out where Pandora’s room was, which didn’t work because the answer to that question was “in England.” Still, I was able to just focus on how freaking great it was to be there with the people who were there, to make new friendships with new people and strengthen the older ones, and to enjoy being myself among people who appreciate me for what I am.

More soon: I’m not going to promise that I’ll update tomorrow, as I’m presently in Los Angeles and I’m a very busy girl while I’m here. I’ll do it ASAP!
<3 p="p">