The last day of Chicago Crimson Moon was far less eventful or busy than those before: I mostly spent it chilling out in Morgan’s suite with friends, and I participated in a medium amount of spanking. Highlights of the day included Drlectr spanking me (and just about every other girl still in attendance) with “the Bible Belt”– a leather belt with “BIBLE” imprinted on it that was made by Big Bubba.I also got to spend time talking to some people that I was familiar with from the internet but hadn’t met before, including Cassandra Park, who is just as insightful and well-spoken in person as she is in her writing!
That evening, I did my only actual video for Chicago Crimson Moon– this was in association with the new production company called Saturday Spanking Club. It was a lot of fun to film, and it involved two tops and two bottoms: always a good thing! My spanking scene is pretty intense and includes me crying (not like that’s all that unusual: it seems like I’m crying in about a quarter of the videos that I do these days). Anyway, I had a great time shooting it, and can’t wait to release it on my Clips Store.


That night, my friends, Korey, James and Vincent and I spent a long time talking. It started out with some semi-serious discussion and devolved into a long and ridiculous conversation about how to have two live-in concubines for $5 a day or less. All three are great people, and I’m so happy to have had a chance to spend as much time with them as I did during CCM. We ended up going to sleep about an hour before we had to get up to go to the airport. But that was okay, I assumed, because I would be on my flight to Los Angeles shortly after that and I’d be able to sleep.
WRONG. I checked my bags, I went to my gate, but because a friend had gotten me a ticket that did not guarantee me a seat, I didn’t get on my plane. I sat and chatted to Malignus on the phone for a while, then went to the next flight. I did not get this flight, either. I did some work (difficult, since there was no free internet in the airport) and then went to another flight. No luck. I ate a tiny lunch and then went to another flight. I did not get on. Between my lack of sleep, the fact that I was carrying around a bunch of my stuff and the fact that I really, really wanted to be in Los Angeles already, I was getting frustrated and worn out. Sometime in the early evening (after I’d been in the airport since 7 AM), I called Malignus and admitted defeat– it seemed that there was no way I’d be getting a flight. He got me calmed down and walked me through the creation of a plan, called a bunch of people and places for me and enlisted the assistance of friends. In the end, I got a flight to LA the next morning, a hotel room for the night and a ride to said hotel. I had a really hard time sleeping in a hotel all by myself, but because I was exhausted, I finally fell asleep. The next morning, I got an early cab to the airport and was on my flight by 7 AM.
Unfortunately, this lead to me arriving in Los Angeles a day and a half later than originally planned, which meant that I had to cancel a trade shoot with an art photographer which I had planned for the first day I was to be in town. The photographer opted not to reschedule, which was sad, but not the end of the world. I spent the first day or so getting rested up and regaining my sanity after air-travel had destroyed the majority of it. Then, I dived head first into working. The first couple of days were mostly spent setting my schedule: people tend to say “Sometime while you’re in LA, we’ll shoot,” which doesn’t do me any good in terms of scheduling, so I had to run around and pin down times with various people. Besides booking shoots, preparing myself for them in various ways (stretching or making minor changes to my appearance) and going to shoots, I spent time preparing for my own productions, planning for Texas and Shadowlane, converting and uploading clips to my Clips Store and trying to get to see every single person that I knew in Los Angeles. I was originally planning to stay in LA for a week and then fly to Sioux Falls. From Sioux Falls, I intended to fly to Texas on the 15th for even more shooting, but as my schedule for Los Angeles came to burst at the seams, I decided to stay in LA until I flew to Texas. Despite staying for twice as long as originally intended, I was still without much downtime, and discovered that it was impossible to please everyone, so I just did my best. I got to spend time with a lot of amazing people who I love very much, and I’m super thankful for that. I also got to do lots of shoots. Aside from the first two days I was there, I think that I worked every day I was in Los Angeles.
In addition to a plethora of art photographers, I shot with Dallas Spanks Hard, which was certainly an intense experience, and did a ton of shooting with Lily Starr Spanking. I also spanked Odette Delacroix and Maddy Marks for two different videos that are forthcoming on my site. Here are a few of the fruits of my labors:

I also managed to attend a munch, spend most of a weekend with Lily Starr and Chica09, have fun at movie night with Epipelagic and company, go on a couple of dates and eat lots of really good food.
I don’t know if I’ve mentioned this before, but in Sioux Falls, if you want to eat something exotic in Sioux Falls, you pretty much have to cook it yourself. There are a couple of restaurants in a number of different foreign cuisines available, but they are all extremely americanized. So, when I was in Los Angeles, I made a point to go on an international tour with my mouth (I realized how inappropriate that sentence was and decided to leave it there anyway, lol). I ate so many freaking delicious things. I ate Indian food, Ethiopian food, massive amounts of sushi, samosas and onigiri from street vendors, Japanese curry (which may be my favorite food of all time), an insane amount of fresh, organically grown fruit, delicious “grown up” mac and cheese with kale and tomatoes in made by my dear, sweet Zeki, Cajun food, prawns, lobster, black sesame ice cream and this cupcake that looks like a bear: 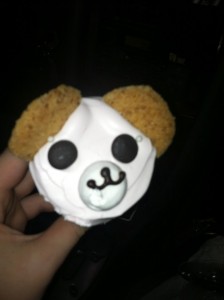 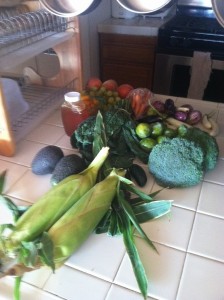 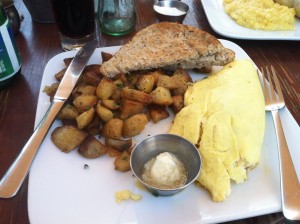 I somehow managed to do all this and then fit into clothes that I had put into storage before I left LA because they were too small for me. Who’s a boss? [Note: I am technically the opposite of a boss. Move along.]
I also went to a vanilla engagement: the Los Angeles Little Tokyo Tanabata Festival. In case you haven’t figured this out on your own, I’m very fond of Japanese culture. I got to spend some time in Little Tokyo this weekend for the festival, and while it’s way less cool than being back in actual Tokyo (where I haven’t been in several years, unfortunately) it was still pretty epic win. 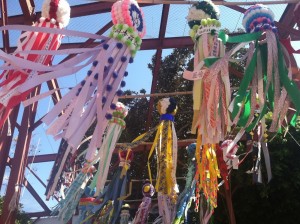 I did have an unusual experience at the Tanabata Festival, though: a fan recognized me. I’ve had a few encounters where I was pretty sure someone recognized me. Usually, this happens in some place like a gas station or an airport. Someone, usually a guy, insists that they know me from somewhere, but I’ve never seen them before in my life. Then they realize that they know me from seeing me get spanked on the internet (but don’t say this) and get suddenly embarrassed and have to go. This time, though, it was a younger guy (in his 20’s or early 30’s) and he came up to me and straight-up asked me if I was Alex Reynolds. I wasn’t with anyone at the time, and there was nothing relating to the (extremely few) parts of my vanilla life that I keep secret around, so I told him that I am, indeed, Alex Reynolds. He said that he was really fond of my work and watched my videos on a few different sites. We chatted for a couple minutes and then he took his photo with me and we went our separate ways. It was a kind of interesting experience. It didn’t make uncomfortable at all: I found it kind of nice. It’s still kind of mind boggling that a year ago this time, I’d just started blogging and had never done a video yet, nor had I been to a party, so I was basically a nobody, but now I’m getting recognized on the streets of LA while I’m eating onigiri. It’s been a kinda crazy year, I guess!
I also got to have lunch with Erica Scott, which was a huge treat. It was unfortunate because it took me forever to get there, and then couldn’t stay as long as I’d have liked, but we got to talk and get excited about Shadow Lane together.
At the end of my time in Los Angeles, I somehow managed to pack up the majority of my stuff (I had gotten things out of storage) and I took off for Texas, where I am at the moment.
I’ll be trying to keep you updated as I go, this time, but it’s a bit tricky while on the road.