My fourth TASSP is done, and it was a wonderful time. On the plane, as I was headed to England, I started to think about the past three years of my life in the National spanking scene, and all that has happened since I first arrived at TASSP in 2012.

I remember the overwhelming, full body anxiety I felt as I first showed up at the old TASSP hotel. What if no one liked me? What if I didn’t make friends? Could I really handle a whole weekend full of getting spanked? And play with people I didn’t know yet? Would it be weird to watch others playing? What would the activities be like?

I imagined that, realistically, I was probably going to have a pretty good time. I didn’t imagine that on that day, I was going to meet people who, upon seeing them three years later, I’d run down the hallway to tackle hug, or who would get tears in their eyes when it was time to go at the end of the weekend.

I guess what I mean to say is that I didn’t know when I first arrived at a National party that I was actually arriving at my home for the first time, that I had found a kind of acceptance and a feeling of belonging which had been lacking throughout my entire life.

I didn’t really feel it at that first party. I met people who I really liked, but in the couple of days that I was there and my shy nature back then, I didn’t get to know them that well. I think back on some of the people who I met for the first time there, and I can’t even imagine my life without knowing them. Some of them were people I spent a lot of time with at that party and never stopped wanting to spend a lot of time with. Others were people I only met in passing, but would spend more time with at other parties in the future and become fast friends. 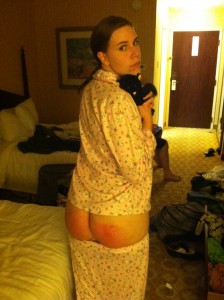 Spanked at my first party ever

I met someone at my first TASSP with whom it would take years, literally up until last month, for our friendship to properly blossom due to miscommunications and someone negatively influencing our ability to get along. Now, we’re finally having the friendship we should have always had, and that’s an amazing feeling. Telling her that I’ll miss her and that I was so glad we got to spend time together this weekend as I left and both of us knowing that we really meant it, finally, was one of the most refreshing feelings.

I made a friend at that party who ended up doing a lot of really hurtful and destructive stuff to me, but the spanking world can’t always be perfect. I have met people who were just incredibly toxic through the scene, yes, but it’s important to remember that for everyone who has hurt me, I’ve met countless more who have enriched my life and made it wonderful, and those are the ones I want to focus on.

I was a very different person than I am now when I first showed up. I had no idea how much I would grow over the next few years. I was very new to modeling, and almost no one knew who I was. I didn’t really even participate in most of the events for models, although I did do several shoots at that party. I worried that I didn’t fit in with the other, more established models, including some of the people who I now think of as very good friends! In general, I was pretty awkward. I was kind of still in my post-grad years where I wasn’t sure of my identity yet, and I think that the way that I dressed and presented myself suggested that to whoever was looking. I had pretty bad skin still, and didn’t know what I was doing with my hair or makeup in the least. It took me a few more years to figure this stuff out: I’m feeling pretty good about it these days, finally.

I had never switched before, and still didn’t really understand the social parts of bottoming, either. Roleplay and play punishment were still brand new things to me, and I was straight up uncomfortable with the idea of bratting. Asking people to play? That was a little much for me! Saying no to someone who asked me? That also wasn’t happening. I didn’t go to The Dark Party my first year because the idea of possibly witnessing sexual play made me nervous. I don’t remember if there was a little’s party or not at my first TASSP, because if there was, I definitely avoided it. I had not yet embraced that side of myself in the least, and was working hard to repress it.

And now? Look at how I’ve grown! I felt so in my element this weekend, whether I was bottoming, Topping, roleplaying, age-playing, giving a presentation or running an event. Like many people, I had my moments where I got overwhelmed and emotional, but I had my friends there for me, and these problems were quickly straightened out so we could all get back to enjoying the weekend. It’s hard for me to believe that three years ago, I was as meek as I was.

I see these changes in many of the friends that I first met at my first party, too. Years in the scene have helped us to find ourselves, and the friendship and support we’ve found there have helped us to grow confident. We’ve slowly been shaking off the years of shame and repression that we felt when hiding our kinks, and when we could feel safe being ourselves, we’ve truly flourished. It’s a beautiful thing to see. 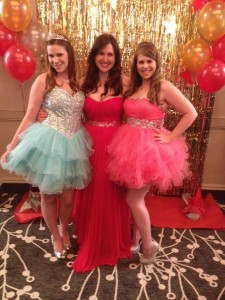 With Princess Kelley and Christy Cutie at TASSP 2014

The scene itself has grown and developed, too. It’s a slow process, but things are growing more diverse and accepting. This party was probably the most diverse one I’ve ever attended. There was a lot of racial diversity, people of a good mix of (18+) ages, lots of both seasoned party goers and newbies, those who were local and those who came from far away, people who are spanko purists and those from the greater BDSM scene who share our love of smacking ass, lots of LGBTQ people. I hope this trend continues to grow. It makes me so sad to think that there are people who worry they won’t be accepted in the spanking scene because of another aspect of who they are. 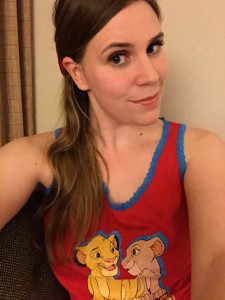 Dates tend to mean a lot to me, so celebrating my third years of parties by partying hard with lots of amazing people was definitely great. I can’t wait to see what the next three years bring me. I’m so ready.